...a boy!  Jackson will welcome a big brother this summer (Aug. 23rd).  I've already started envisioning how Jackson will react to having a little brother, let alone having someone else require Mommy's attention...it will definitely be an interesting addition to this little journey that we are on.

Its been a hectic and busy day over here starting with an early ultrasound where all checked out well with the newest addition.  I continued on to work, then rushed out of work for a pre-operation physical (more on that at a later time), an attempt at getting a cervical spine x-ray for Jackson for said operation (again, more on that later) with little luck, because, oh yeah, I'm pregnant and can't hold Jackson down to have them take the x-ray, then went to the grocery store to pick up prescription with a hungry and cranky child...

So long story short...I'm exhausted but excited to share the news.

Jackson
Two weekends ago we took a drive down to Herndon, Virginia to pick up a crawling track for Jackson.  I had seen that some parents built these to help promote crawling in their little ones with DS and had mentioned to Adam that we should build one when Jackson was ready.  Jackson is ready and just like that, a family posted on a listserve that they were trying to get rid of their crawling track as they were getting ready to move.  I responded quickly that we were in Baltimore and it wouldn't be too far for us to drive down and pick it up.  Two weeks later, we drove away with a new little tool to use with Jackson.  (Thanks again to Heather and her family!) 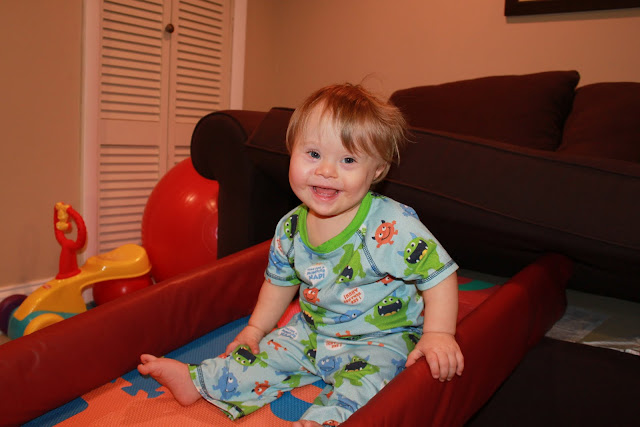 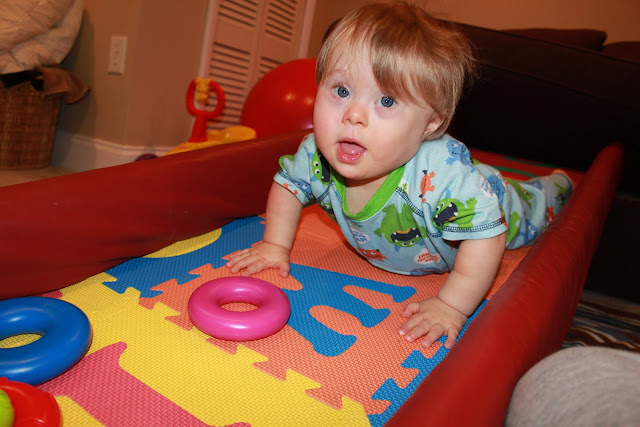 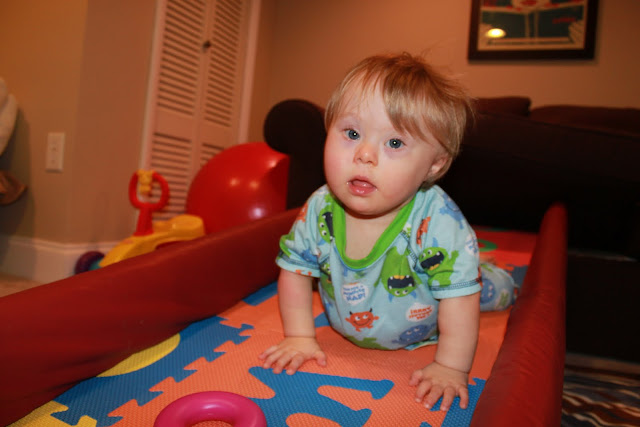 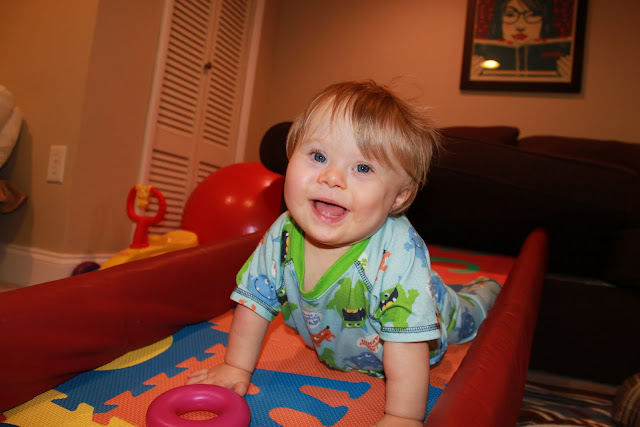 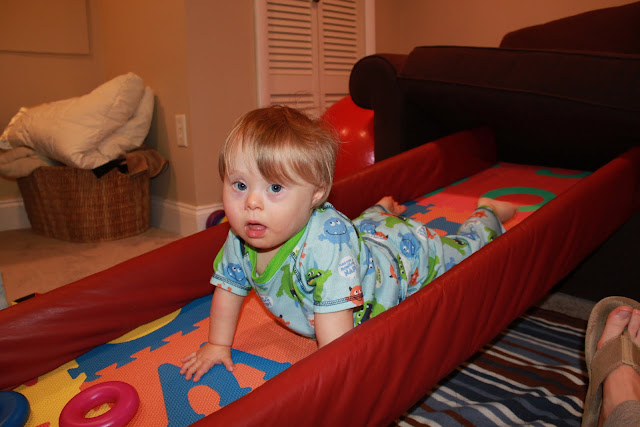 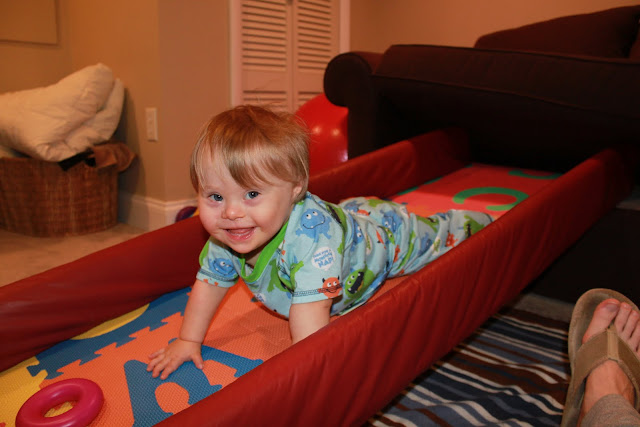 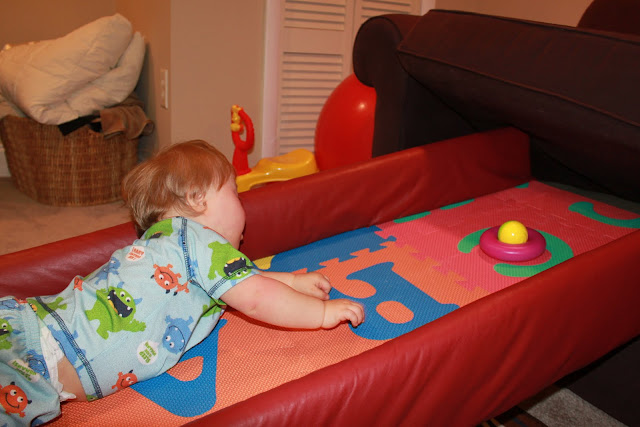 He is certainly ready.  He's getting up on all fours and rocking...or even getting up in a "Bear crawl" position.  He gets where he wants to go with his pseudo-army crawl and has even come close to transitioning to sitting from a crawling position.

Jackson seems to be getting a little pickier with the foods that he's eating.  He really was easy to feed...you could give him anything and he would eat it.  Only recently has he begun turning his head or closing his mouth when it comes to foods that he has no interest in.  Its made meal-time a little more challenging as we're still limited to things that he can chew easily.  His 4 molars have broken through, but he still needs a few more teeth to get some good chewing action going.

Speech
We started speech therapy the other day with a woman named Carrie.  Jackson was very hesitant to participate in anything that Carrie wanted to do with him.  She blew bubbles and each time, he turned to me, reached out his arms as if to say "rescue me".  She attempted to play with a Mr. Potato Head doll going through the different parts that she was adding to his body and offering Jackson to hold those parts.  She did a few simple signs and tried to get Jackson to do them by holding his hands, which he wouldn't allow her to do.  She left with recommendations on things to do with him and won't be back for another month.  I wish that she would be coming more often, only so that Jackson will be more comfortable working with her.  The unfamiliarity makes Jackson very cautious and insecure, so I'm not sure how productive our 30-minute sessions will be once a month.

Service Issues
A special educator was suppose to come out weekly to us to work on "whatever is needed at the moment"...so some speech, some occupational therapy...  However, the special educator assigned to us was available at 2:15 on Tuesdays.  I explained to the woman that I didn't get out of work until 2:45 and wouldn't be able to get home until 3:30 at the very earliest (and that is pushing it).  Our day care does not allow therapies to come to her home, so we have been fortunate enough to schedule our other ones for later in the day.  I contacted our case manager, who has been told this MANY times and she directed me to call the director of the special education teachers for Infants & Toddlers to discuss this with her.  I called her and was directed back to the director of I&T.  I explained to him our situation...and told him that we would be switching day care in the fall and that I was off for the summer so I was hoping we could be accommodated in the meantime with services at 3:30 at the earliest just until I get out of school.  He said they would see what they could do and our case manager contacted me a couple days later and said that there were no special educators willing to work after 3pm.

So...long story, short, we won't be receiving that service until June when I get out of work.  I am going to pursue having an occupational therapy reevaluation to see if we can get OT added instead.  Although, I'm guessing that by the time we have a reevaluation scheduled (which I believe they would have 30 days to schedule) and therapies started (another 30 days)  it very well could be the end of my school year (the process can be very slow at times).

We decided to forgo the amnio this time and pursued the new blood test, MaterniT21.  So about 2 1/2 weeks ago, I made the trek to Mercy hospital (twice actually...the first time I went, I got there just as they were closing the lab up) and got my blood drawn and shipped away to the biotech company Sequenom.

I contacted Val, our genetic counselor at St. Agnes hospital, on Thursday to see if the results had come back since I hadn't heard from her yet.  She hadn't received them, but contacted the lab to see if perhaps they had the results, but hadn't faxed them yet.  She returned my call shortly later and told me that the blood work came back negative for DS.  The percentage of 21st chromosome fragments were consistent with that of a pregnancy with 46 chromsomes, not 47.  (They also ruled out T13 and T18)

So this baby comes with the regular ol' 46 chromosomes...the news does bring us some peace of mind although we would have been just fine with the alternative.

Check back to find out the sex of the baby...we go for our ultrasound on Tuesday.

Spring is Sprung!
Like many this time of year, we're enjoying the burst of warmer weather and trying to get outside as much as possible and airing out the house.

We've tested out our Radio Flyer wagon and went down to the beach by my in-laws... 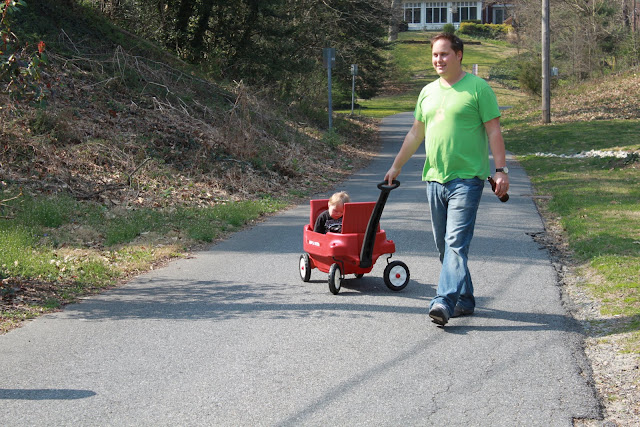 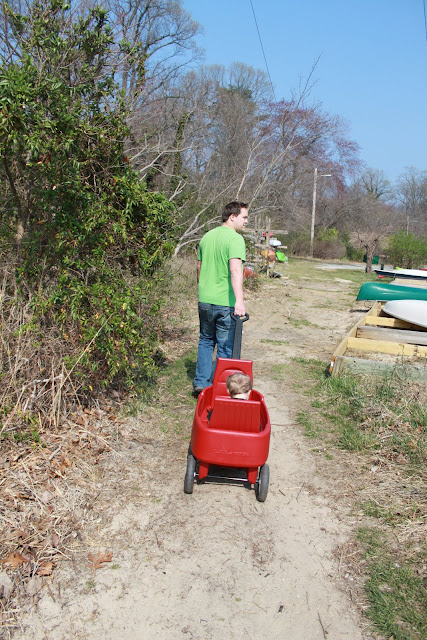 Tried out the swings for the second time (first time didn't go well)...he lasted a little bit longer this go round... 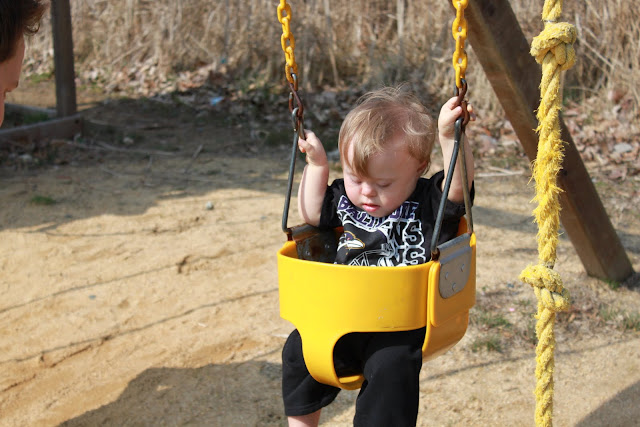 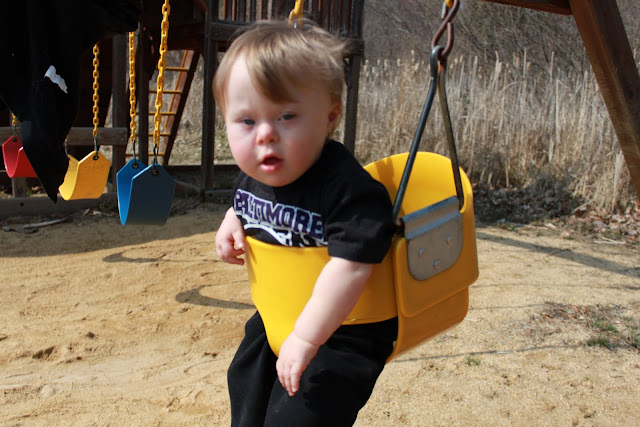 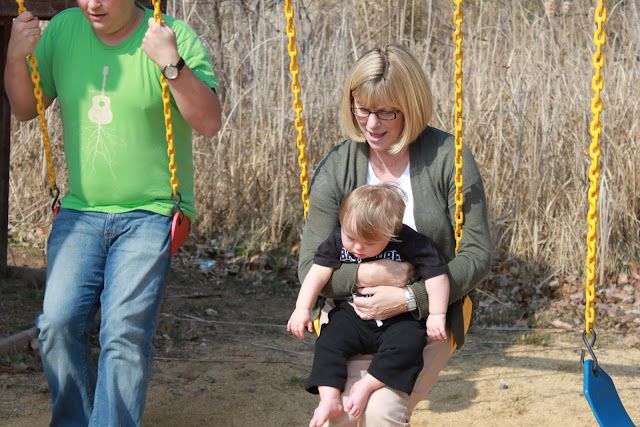 And went down the slide for the first time... 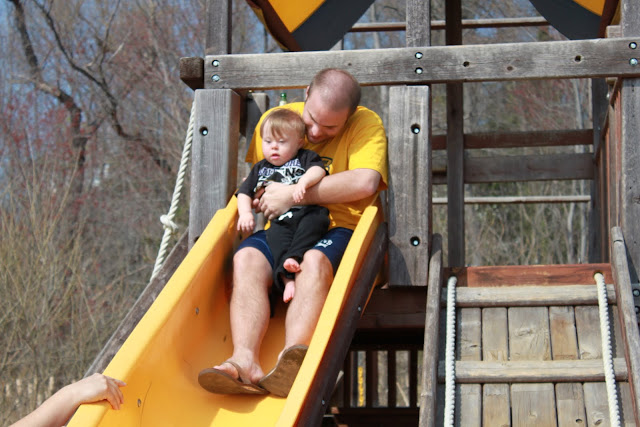 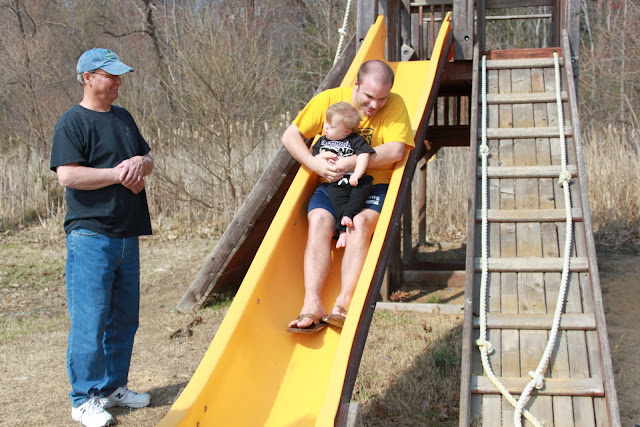 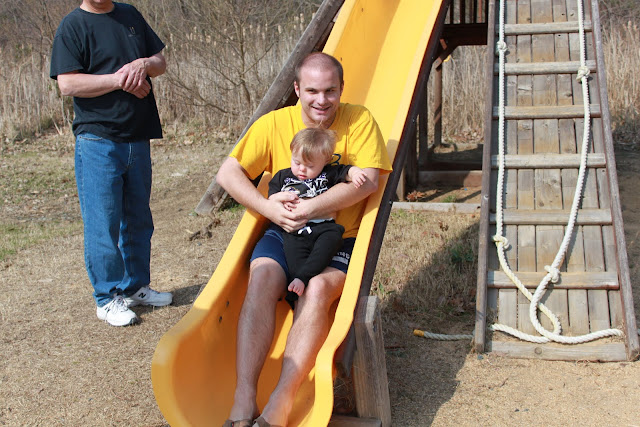 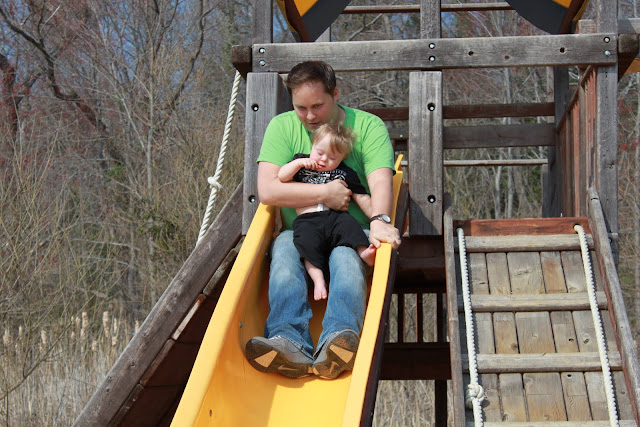 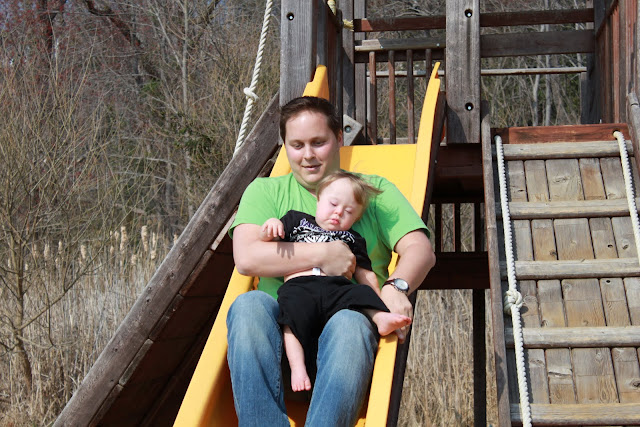 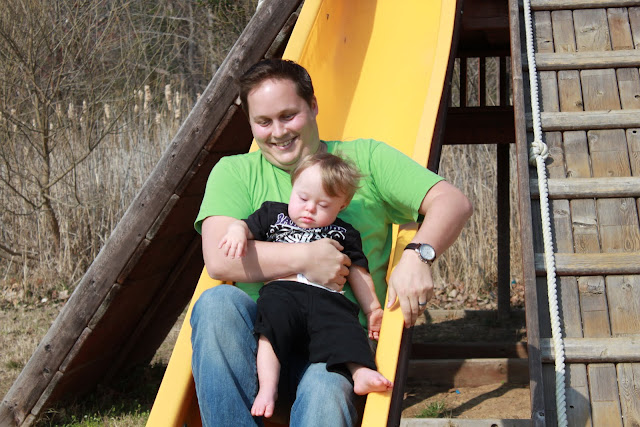 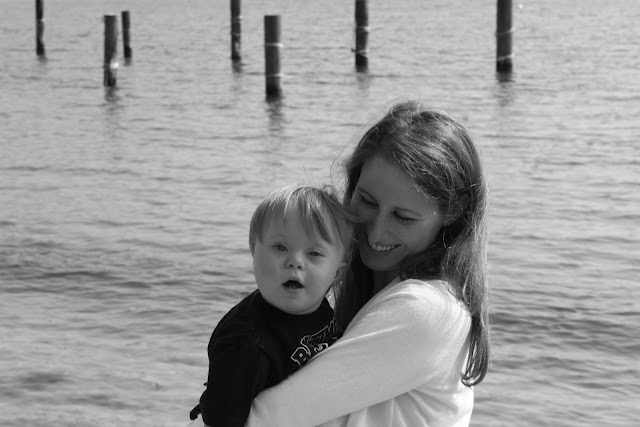 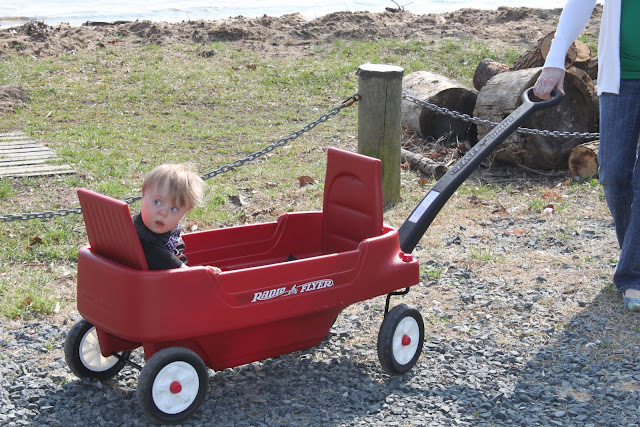 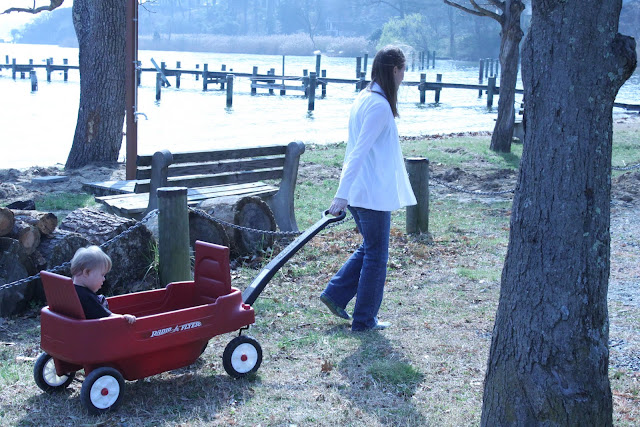 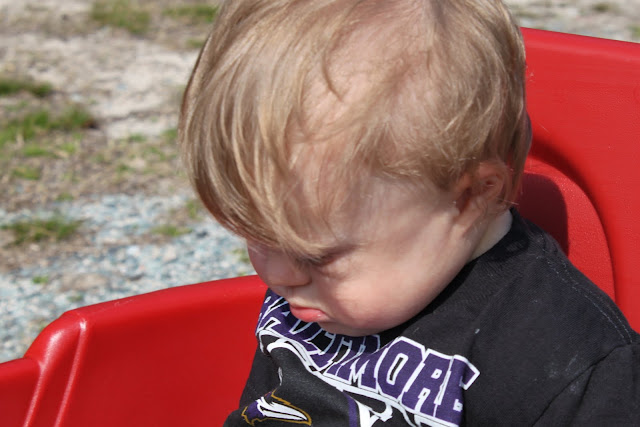 Last weekend we attended our first event with Chesapeake Down Syndrome Parents Group and truly enjoyed our time there.  We met other couples and shared stories and experiences, and watched the kids interact and play with one another.  And a few weeks ago, my mother-in-law was telling us about how a close friend of her's just had a grandson with Down Syndrome.  We told her that perhaps when we were done with our new crawling track, that we could pass it on to them.  During the parents group we spent about twenty minutes talking to a couple with a 6 week old beautiful son with Down Syndrome before realizing that we were in fact talking to the couple that my mother-in-law was speaking of.  A small world!!!

We truly look forward to our next outing with this group and hope we will get together with those we have met through this organization.  Everyone was so kind and friendly, and we're all connected by this special extra chromosome. 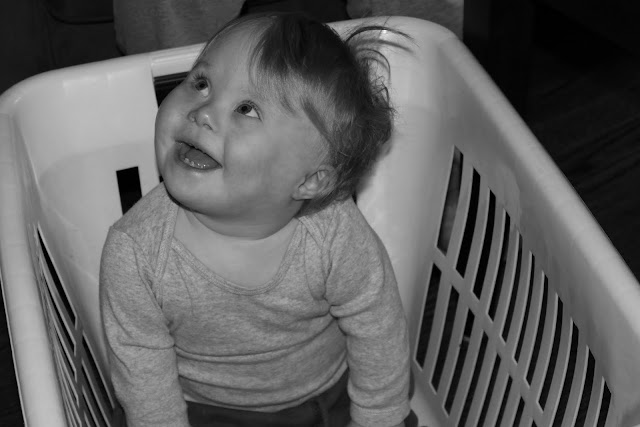 Wednesday, 3/21, was World Down Syndrome Awareness Day.  It's a day to show that our little ones have an important role in society too.  A day to show that just because they were born with an extra chromosome doesn't mean that they are less worthy or less significant.  It was a day to show that Jackson, our little one who came to us with something extra, is unique and will show us amazing things and makes us laugh and smile every day.  He shows us that "One over is beautiful"...the slogan of the t-shirt I got from Chesapeake...

I can't imagine anyone who would think otherwise about our little man... 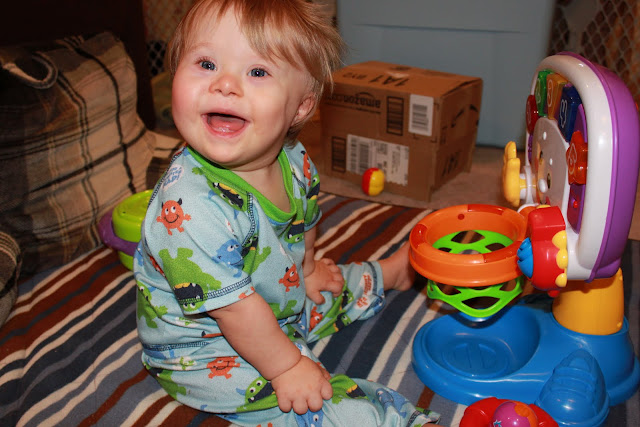 Happy weekend...and once again, check back Tuesday to find out pink or blue!
Posted by Becky at 4:13 PM 1 comment: