Yesterday Jackson spent the day at Johns Hopkins Hospital to repair a hypospadia.  I'm sure Jackson will one day be oh-so-pleased that I'm discussing his nether-regions so publicly.  Sorry, Jackson...  Typically, if you want your son to be circumcised, it is done while your baby is still in the hospital.  We had to delay his circumcision due to this hypospadia and a twisted raphe since they would use some of the removed foreskin as a graft during the repair and reroute his urethra to the proper hole.


We were schedule originally for 1:30 in the afternoon, but were luckily moved up to 11am.  Jackson had to fast from midnight till the surgery, although he was allowed apple juice and jello two hours prior to our arrival (9am) at the hospital.  He did well with this fast, although spit up quite a bit of the juice/jello as he still does not do well with straight liquids due to his reflux.  He rapidly deteriorated around 10am, crying loudly as Adam and I tried to console him and get him to relax.  Every few minutes we glanced at the clocks counting down the minutes till we could get him into surgery.


The nurses told us we could use the wagon to wheel him around and gave us a portable CD player with lullabies to try and calm him.  It took a while, but he eventually cried himself to sleep giving us about 5 minutes of quiet before the anesthesiologist came by to speak with us and take him away to surgery.

I wanted to go back with him to the operating room, but since I'm pregnant the anesthesiologist wanted Adam to go.  I gave Jackson a kiss on his peacefully sleeping face and they wheeled him away to the OR.  Adam came back shortly, telling me that they placed the gas mask next to his face while he was still sleeping which put him completely to sleep prior to the real anesthesia.  Adam picked up a very droopy baby and handed him over to the professionals.

Jackson was operated on for approximately an hour (they began at 11:20 once he was fully under) and as soon as we were told he was in recovery, we jumped up and walked quickly to the recovery room.  We opened the door to the room and immediately heard a cry that we both recognized very quickly.  I'm sure we looked very anxious to provide reassurance and wish away any discomfort that he was having... The nurse asked if I wanted to pick him up and I did not hesitate at the opportunity.  I lifted him up delicately and placed him in my arms, sending all of our love to him as his cries eased into whimpers as he settled his head on my shoulder.  He cried out only when the blood pressure cuff tried to take his blood pressure (which they eventually moved to his leg since they couldn't get a reading on his arm due to his crying and squirming when it was inflating).  We offered him juice, but all he wanted was to be held and comforted.

About an hour post-op we were able to remove all the wires, the IV (which once removed, took a while to stop bleeding as we found evidence to the large blood stain on my jeans) and get him dressed and out of there.  By the time we were at the lobby, Jackson was back to giving us smiles. 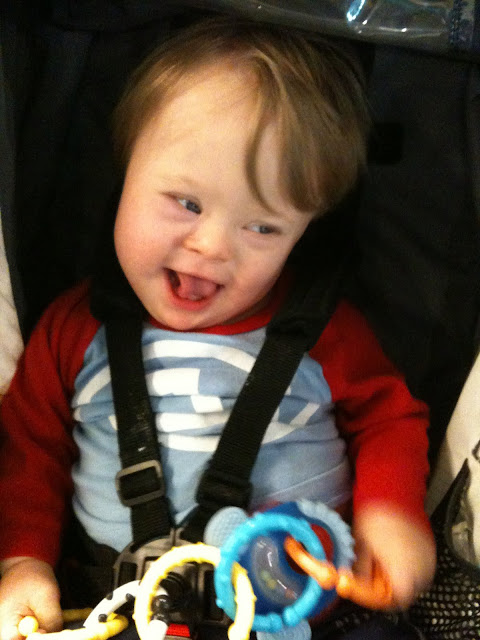 We got very lucky and did not need a catheter (we were expecting to have a catheter in for a week post-op).  His delicate bits look like they've been shrink wrapped to protect him and all we need to do is apply vaseline at the tip of his penis (which we can't see due to his dressing).  His groin is certainly sensitive, but he's in good spirits overall.  He cried out around 10:30 last night and I think he just got scared and was perhaps a little uncomfortable.  He's a belly-sleeper and he was trying to get himself in a position where he wasn't putting pressure on his groin.  After that, he slept through the night and woke up peacefully this morning.

I'm keeping my fingers crossed for a smooth few days till he goes back to JH for his follow up appointment.  But as always, Jackson is a trooper and will probably do great.

As parents, we're glad that the hard part is over with.  I know things could be a lot worse in terms of surgical procedures, but never the less, I'm glad that we can put this behind us.  As the nurses at JH told me, this is your child and its a big deal whether its heart surgery or a hypospadia repair (or tubes as my sister had to go through with her son).

Thanks for everyone's concern, prayers, and well wishes.  Happy Spring Break to you all.
Posted by Becky at 10:13 AM 1 comment: