What a couple of months its been...

Jackson weighs around 22 pounds the healthy eater he is and at last measurement was 31" long.  Before we know it Jackson will officially have grown out of the borrowed carseat we have (thanks Sally) and Adam will need to transition to a 4-door car with a convertible car seat for you know who. I'm assuming this will be happening sooner rather than later...

A few weeks ago we stopped in in at Kennedy Krieger to check in with their PT to see how he's doing.  Jackson, of course, played stubborn and "performed" as well as he could, but they are definitely pleased with his progress.  They were also happy to see that his helmet was off...(more on that later), thinking that will help him progress much better. 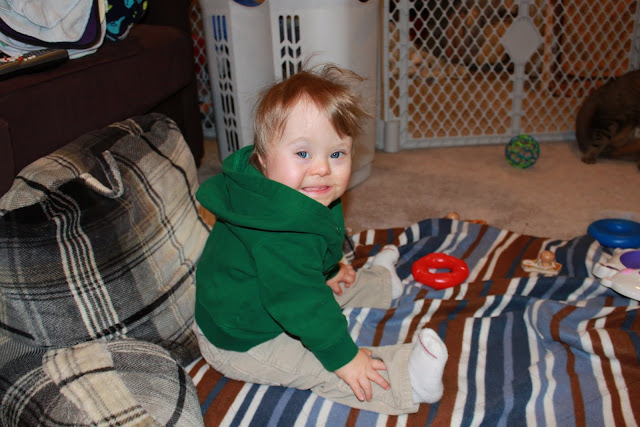 But in reality, Jackson is a sitting boy.  He can do it, but will still fling himself backwards.  He also needs to get used to catching himself with his arms when he's off balance.  Speaking of arms, he's finally figured out that he can use them to push up and he even used to do so on command.

Now he's slowly getting himself up on all fours, but usually holds himself only for a couple seconds that way.  He also has his own version of an "Army Crawl"...it ain't necessarily pretty, but it gets him where he wants to go...and its very amusing to watch.

His PT through Infants and Toddlers has recommended that Jackson start OT (occupational therapy) and Speech.  We have an appointment scheduled for this Thursday where he will be reevaluated, and then once they get his new services set up, we should begin them shortly (I'm assuming some time in March).

For those who may not have seen on facebook, Jackson went to Johns Hopkins to check his heart via echo and ultrasound.  We left with the wonderful news that there is no sign of a murmur anymore and that the hole is now the size of a pinhole.  They told us to come back in three years, in which time, the hole should certainly close on its own.  What a relief!!  We know that many families have to endure stressful and sometimes difficult heart surgeries to repair heart defects in their little ones with DS, so we feel we really dodged a bullet and got lucky on this one!

After a very healthy first year of life, Jackson's had a rough couple of months with what seems like continuous infections.  He keeps coming down with sinus/upper respiratory issues that keeps his nose stuffy/runny.  With a second bout of this infection, he also picked up the stomach bug that so many people have caught this winter.  He lovingly shared this with his Mom, Dad, Grammy, and Pop.  Lots of fun.  So we're currently on our third infection of the winter, including an ear infection.  Jackson is still in great spirits, regardless of the stuffy head. 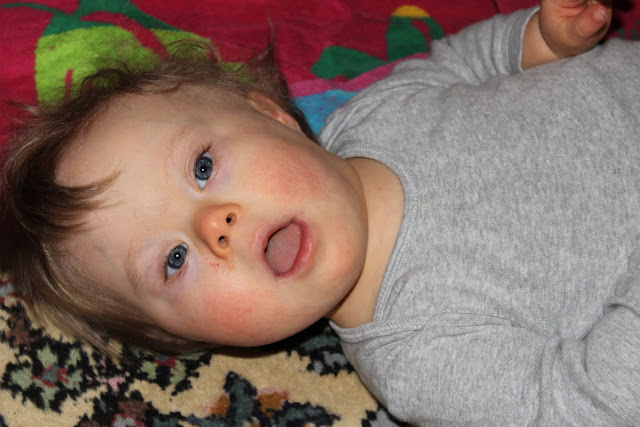 And that leads me to bath time...when Jackson had the stomach bug...he had it in the form of diarrhea, constant diarrhea, for a week.  The poor child had severe diaper rash from the constant irritation (I know, TMI), and because of this, bath time became a little irritable for him.  A few days after the infection had left and the diaper rash cleared up, I slipped on the bath mat in our bathroom while putting Jackson in the tub, causing him to fall backwards in the tub.  Needless to say, Jackson was scared (although luckily not hurt), and has not been the same since when it comes to bath time.  Two days later, I tried to give him a bath and he started screaming just when I turned the water on to run the bath.  I even got in the tub with him, thinking that this would help him be more comfortable and he still cried the entire time.  Its been a couple of weeks, and Jackson is still terrified of the bath tub.  I know that this phase should pass, but it breaks my heart every time he reaches out to me or Adam to "rescue" him from the tub.  As soon as he's out of the tub, he's fine...even smiling again.  This too shall pass...right?

-----------------------------------------------
The day before Christmas Eve, I took a pregnancy test.  My period was a day late and even so, I wasn't expecting to see a positive pregnancy test in my hand.  We told our immediate family that weekend, but have held off on the news until the last few days.  We knew we wanted to have a sibling for Jackson close in age.  We believe he will greatly benefit from having sibling(s) as both Adam and I cherish the relationship with have with our own siblings.  Jackson is going to be a big brother...a great big brother...and we feel very blessed to get to go through this experience again (although hopefully with less drama) and give Jackson a little brother or sister.

We went for our ultrasound on Friday and the baby looks great and is measuring a week ahead of schedule.  So while my initial due date was August 30th, they have moved my due date ahead for August 23rd.

In November, Adam and I went to see our genetic counselor for some preconception genetic counseling.  We knew that Jackson had DS due to trisomy 21 (nondisjunction of the chromosomes causing three chromosome 21s), but wanted to have all our information together before we decided to have more children.  At that appointment, we were told that Jackson's DS was due to chance, and had nothing to do with inheritance from either of us.  They offered up and blood test for Adam and I, just to check our own karyotype (picture of our 46 chromosomes) just to verify this so we got the blood test that day.  Both Adam and I did not have the translocation of the 21st chromosome (a piece of the 21st chromosome would reattach to another chromosome, usually the 14th) which could be passed down to future children and cause DS.  We left there with a 1% chance of DS occurring in our future children (1:100...the automatically bump us this ratio since we have a history of trisomy, even though for someone my age the risk should be much much lower).

My OBGYN had encouraged me to think about having an amnio or CVS just to prepare ourselves or give ourselves piece of mind, but after the last amnio, we don't want to go through that again.  I am excited that I will be getting the blood test "MaterniT21+" within the next two weeks.  This blood test has only just been released in the last couple of months as the technology is so new.  They will take my blood work and will be able to isolate fragments of my chromosomes verses the baby's chromosomes.  They tend to see a higher percentage of fragments of chromosome 21 in the blood for women carrying a child with DS.  This higher percentage would give them a positive test for DS, meaning that the child most likely has DS.  The accuracy of this test is just over 99% and is the closest thing to doing an amino or CVS.  In their clinical study, they looked at almost 1700 pregnancies and out of the 212 women that ended up having a child with DS, they were able to detect 210 of those.

There is certainly a lot of debate in the DS community about where this test is going and the worry that people will terminate DS pregnancies more often, but I am glad that I'm given an alternative to the invasive testing of amnio or CVS.   Regardless of a positive or negative test, if we get a child half as awesome as Jackson, we'll be pretty darn lucky.

I think that about catches us up.  Hope to be back sooner rather than later... 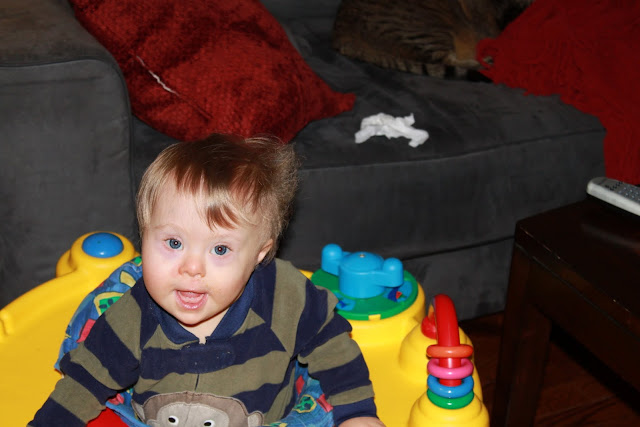 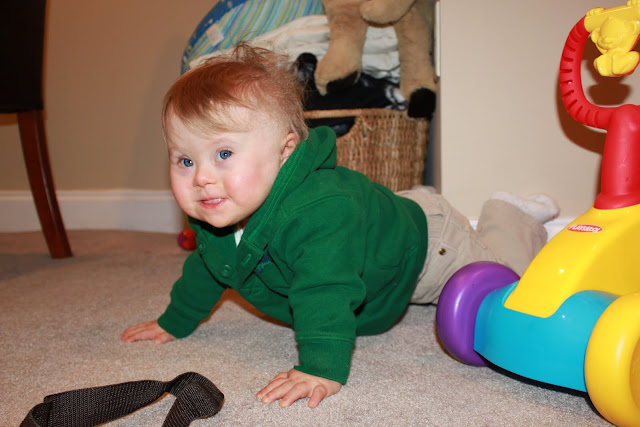 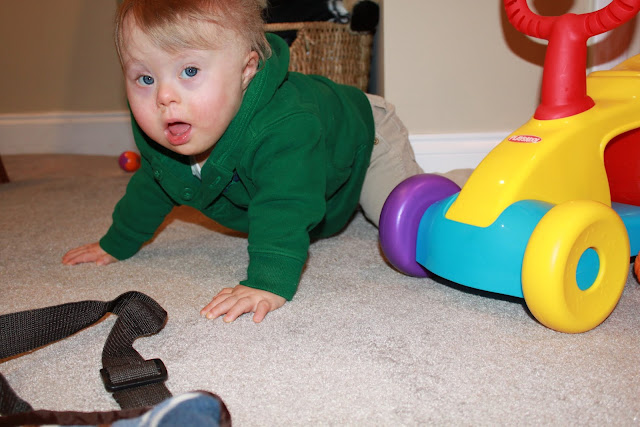