On Monday we had our 6 month well baby check-up.  Jackson could not stop wiggling around...You know that paper that they always stretch out on the table...a complete disaster, crinkled and torn.  All he wanted to do was roll around and play.

So another healthy trip to the doctor's.  He's 17lbs and 26 1/4" long (both 45th percentile on the "normal" chart).  Jackson has been officially diagnosed with plagiocephaly (AKA flat head) and has an appointment at Johns Hopkins to be evaluated for a helmet.  The very next day we have his cardiology appointment...they might as well set up a cot for us!  If I've spoken to you about his flat head, then you know that I was predicting this.  Due to his low tone and preference to one side, his poor dome is definitely flat on one side and now because of that flatness tends to roll that way when he's sleeping.  Our PT wanted us to sleep him on his side, but how in the world do you get him to stay that way (see above comment about paper at doctor's office).

Of course we may have issues with insurance...but we are keeping our fingers crossed that it gets covered and if not, we are ready to go to battle.  But if all fails, we are certainly going to dole out the moolah for this.  We are not naive that we live in a world where we judge people based upon appearances...he is already "different" according to most people and we as parents aren't going to add to his "differences" based upon money.

So long story short...get prepared for adorable pics with helmet included.  If anyone can make a helmet look good, its our man. 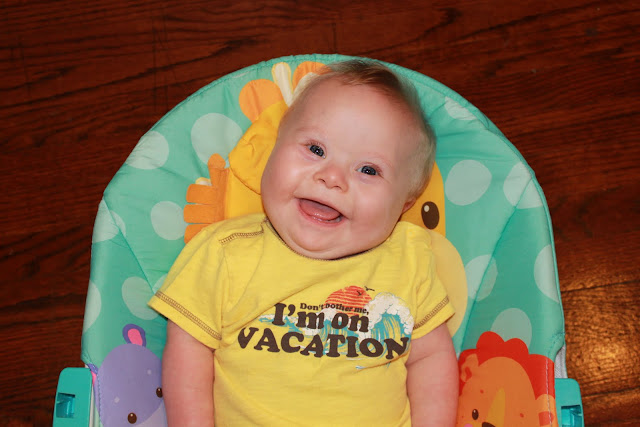 On a (or is "an"...English teachers help me out...I think its "a" because it's referring to "note"...right?) exciting note...did I mention that Jackson has a tooth coming in?  Well...now his 2nd tooth is coming in. 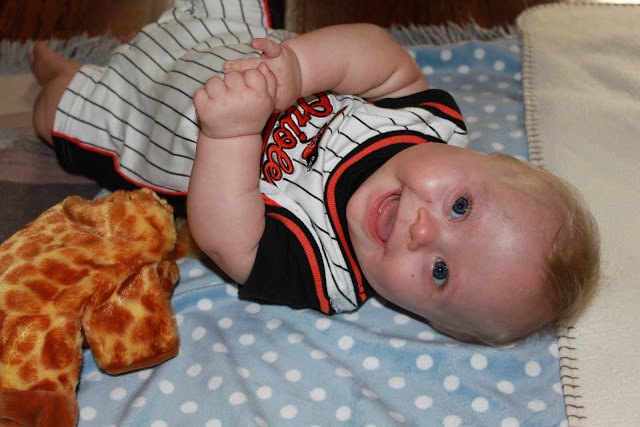 So we are continuing to work on rolling over at PT.  He's a champ at going from his back to his front, but tends to get stuck while on his tummy.  I call this his "beached whale" moves.  Karen said that I had to get a video of this as she had never seen this approach before.  So here is Jackson's attempts to roll back over.  Its highly amusing...so its okay to laugh.

We are really trying to get him to put his arms up and show him how to roll over, but he just does not want to put those arms up.  I'm convinced that once he figures out that he can push up on his arms that it will be a matter of time before he crawls.