I begin this post by being quite grateful that Jackson is sound asleep in his crib taking a nap and Grayson is napping in his swing although I think my time with both boys being asleep is coming quickly to a close.  So forgive this major stream of consciousness...

We've managed to make it through PT on Monday and Speech on Tuesday with Grayson napping in his swing which equals no screaming baby while I'm trying to participate in therapy and communicate with the therapist...

Today OT did not go as well as PT and Speech.  There have been a few therapy appointments recently where I'm trying to console Grayson and hear myself talk at the same time, which let me tell you...does not go well.  I know our therapists were trying to tell me something important during that time, but all I can hear is the wailing in my ear as I begin to sweat from the shrill screaming that only a little baby can make.  Last week, I left the room so many times during Speech so that Keri and Jackson could have a little bit of peace and quiet before finally I apologetically told Keri I was going to nurse Grayson real quick to hopefully calm him down.

----------------------
On Monday we ventured out to the mall to go pick up some shoes and some pants for Jackson now that the weather is cooling down.  His PT wants to keep him in shoes during the day in hopes that they will make him feel more stable and thus make him more likely to stand for longer periods of time (as in, more than one second).  My sister had given us the hand-me-downs from Evan but because he's such a skinny little guy, the pants are a bit too snug on Jackson.  On our drive to the mall, I realized I forgot the Baby Bjorn by the front door and my sling was hanging up to dry from the laundry.  I refused to turn all the way around and told myself that I could rig up the double stroller so it would be safe for him to be in.   We get to the mall, I adjust the stroller carefully so that Grayson was reclined and strapped in appropriately, got his head support from the car seat and placed him in the stroller next to Jackson.  Grayson proceeds to spit up all over the front of his onesie, then moments later starts screaming...but I refused to abort the mission!  So I amble through the mall with baby held in my arms and Jackson sitting in the stroller.  We make it to Stride Rite to get sized and appropriate shoes for Jackson who is not wanting to wear shoes on his feet.  I quickly make our purchase while still holding crying baby and now dealing with a very unhappy Jackson.  I'm telling myself "We are at the mall.  I'm already here.  We are going to now get pants", but as I wheel Jackson and the crying baby through the mall, I decide that enough-is-enough and I hit the abort button.  That's what they make on-line shopping for...crazed, stressed out moms with peanut butter and jelly in their hair and dazed look in their eye, right?

------------------------------
Last week I had a particularly bad day nursing Grayson.  He just wasn't latching on properly and  he wasn't getting enough during a feeding therefore was extremely fussy.  I pumped to see if I could get him to feed better by bottle and of course timed it perfectly with Jackson needing to be fed.  This is what it resulted in...


-------------------------------
We've been working on some good things with Jackson and have made progress.  He's actually beginning to crawl "properly" which to be honest, isn't as huge of a priority for me.  He gets around really well with whatever method works best for him, but its still nice to see him crawl on all fours.

He's doing a lot more pointing with his index finger to push buttons and show interest in things. 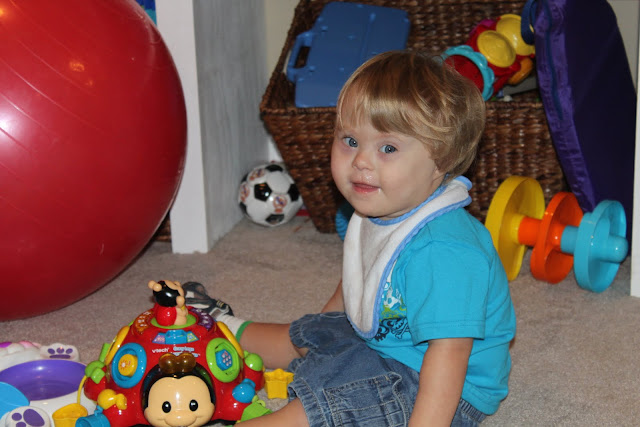 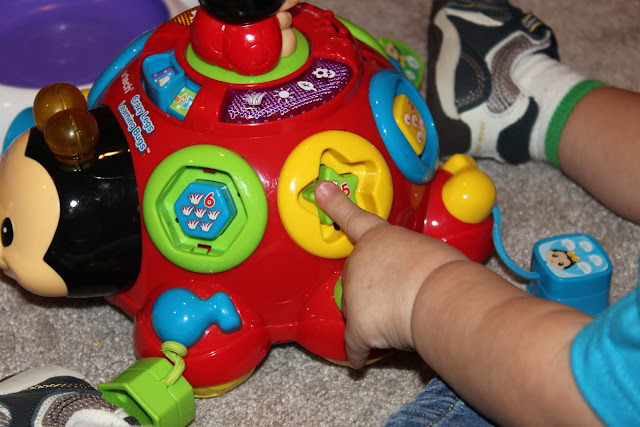 But the biggest thing we're excited about lately...

We got him to suck from a straw!!!

I purchased these Honey Bear straw cups through www.talktools.com in hopes that I could transition him from a bottle to a straw cup.  Turns out he hated the honeybear cup so much that just by looking at it he would freak out.  We took a major time out from working on this and reintroduced it a few weeks ago.  Last week I said I was going to do it every day.  Initially you hold it and squeeze it directly into the child's mouth. And by day three he was sucking by himself!  We'll continue working on it especially since I still have to hold the cup for him.  So I'm going to increase the practice to twice a day and work up from there.

OT began a few weeks ago and looked like this last week...

Laura (his OT) wanted to see if he would be interested in finger painting with pudding.  He clearly enjoyed the pudding and wanted nothing to do with the finger painting.

We are finally beginning special instruction and had our initial visit this afternoon.  I'm more comfortable with adding this to our weekly appointments now that I know more about what they are going to look like, however, I'm not going to lie that I don't like having an additional appointment to stress over (which I realize is selfish on my part).  So it looks like our schedule (at least until I go back to work) will be Mondays - PT, Tuesdays - Speech, Wednesdays - OT, and Thursday - Special instruction.

------------------------------
Last Saturday we attended our second Buddy Walk.  Unfortunately we forgot our camera, but I took a couple with my phone and that'll have to do.  Adam's company has been so great to focus their charitable efforts on causes that support the inclusion of individuals with Down syndrome and sponsored the Buddy Walk for the second year in a row raising $2850.  Thank you to all who came out and all who donated!  It really means a lot to our family. 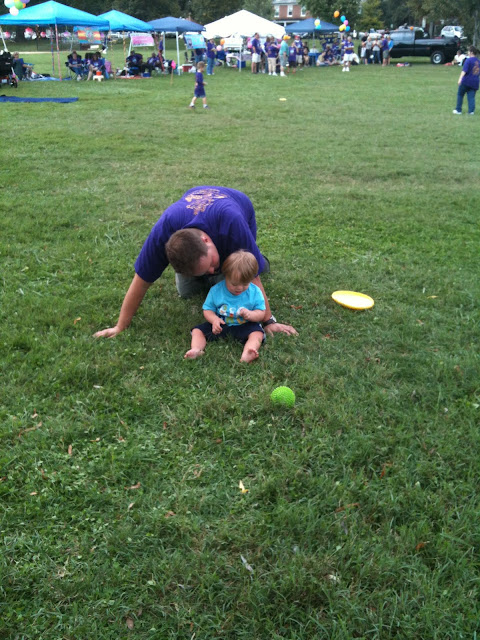 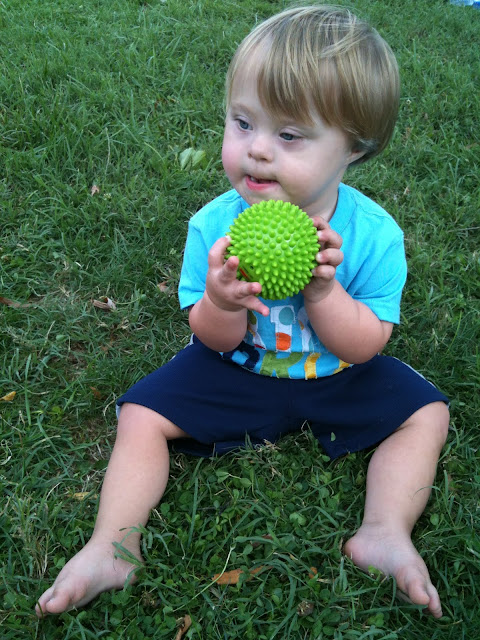 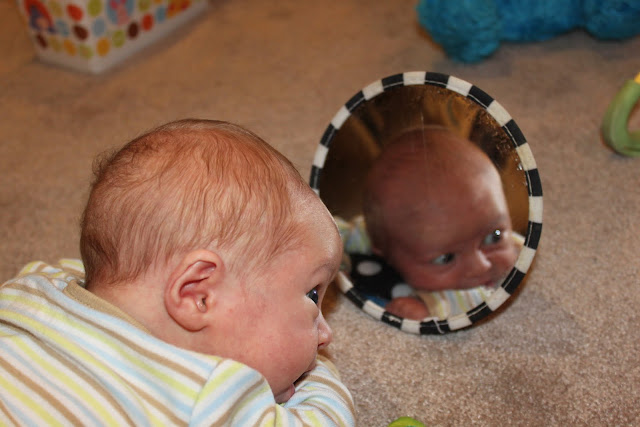 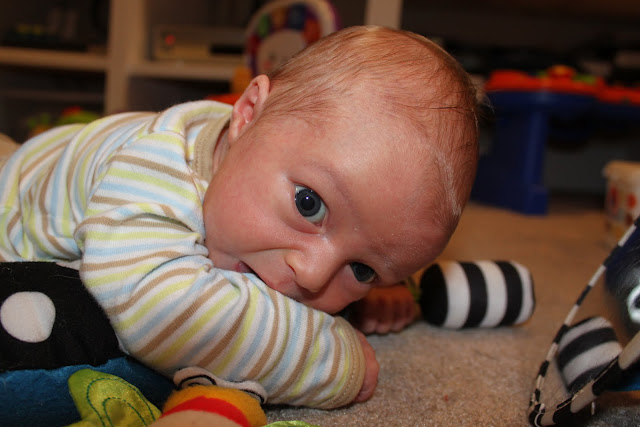 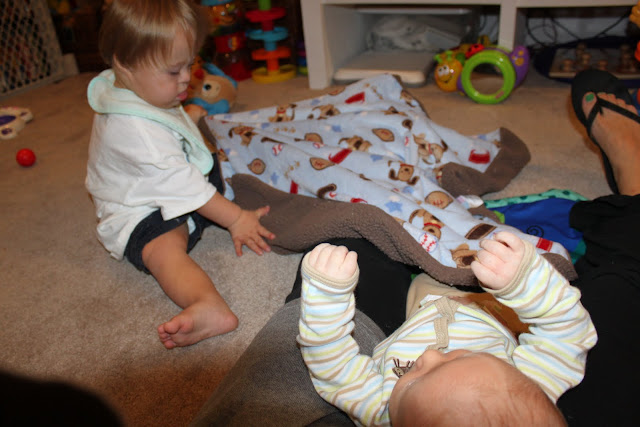 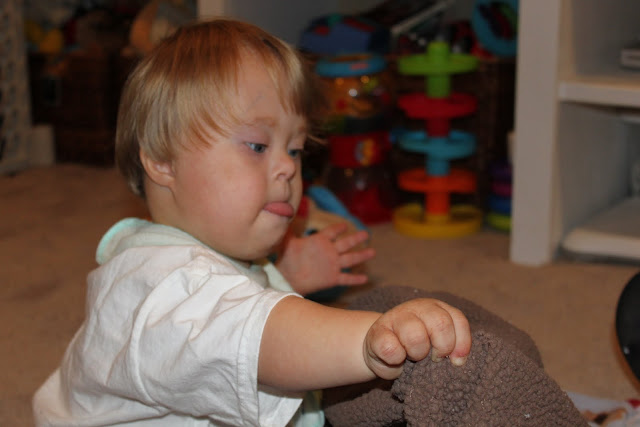 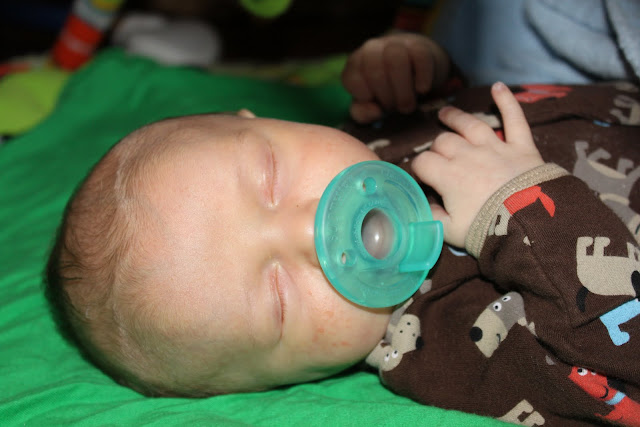 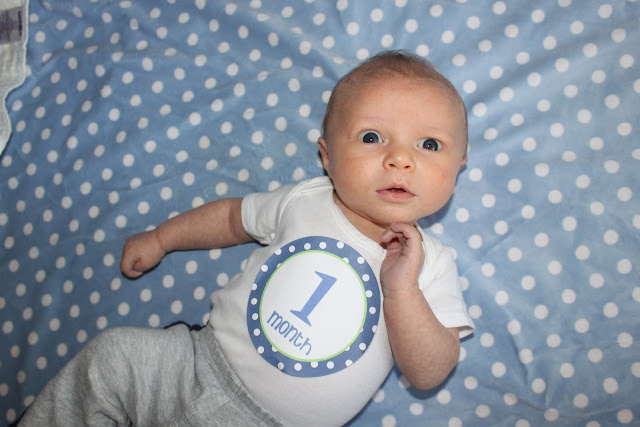 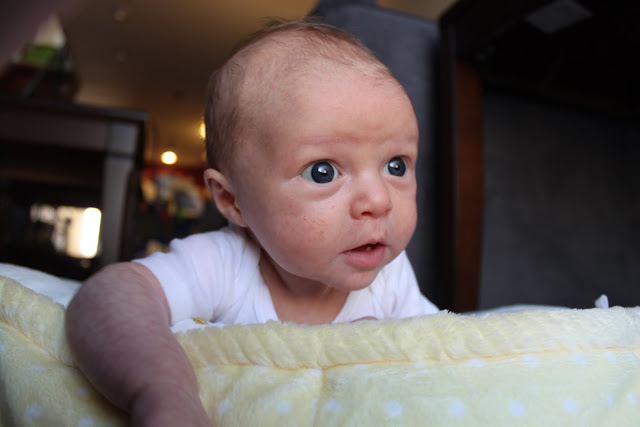