Turning three was a big deal in this house...Turning three meant we had to decide whether to transfer Jackson's services to an IEP through the school system (Individualized Education Plan) from his IFSP (Individualized Family Service Plan) that he was receiving through Infants & Toddlers.  We knew we wanted to transition him to the school program where he would have daily therapies and be among same-age peer in a school-like setting.  However, since both Adam and I work, we needed to get a waiver to use our day care address instead of our home address so that a bus would pick him up to and from day care (the program is only  2 1/2 hours a day). When we sat down for our second round of transition meetings, they could not guarantee we could get the waiver which is determined in the third and final round of transition meetings (and they said that most likely we wouldn't get it due to high enrollment numbers) and if we signed the paperwork to transition then there was no turning back.  Our concern was making too many changes for him at once.  If we didn't get the waiver and we chose to move forward with the IEP, we would have to change his day care...meaning he would start a brand new day care and go to school (and riding a bus).  We felt it was too much.  So we walked away from the meeting disappointed but feeling like it was best for Jackson to stay on the extended IFSP until the fall when I could transition him to a new day care over the summer.  The next day we got a call from his case manager saying that they granted us the waiver and that Jackson would get to go to school!  Our case manager bumped into someone who asked about how our meeting went.  She said that it didn't go well and that the she felt the parents felt pressured into staying with an IFSP due to the waiver issue.  This woman told her that she would look into it and by the end of the day we were granted the waiver.

So long story short, on January 2nd, Jackson had his first day of school. 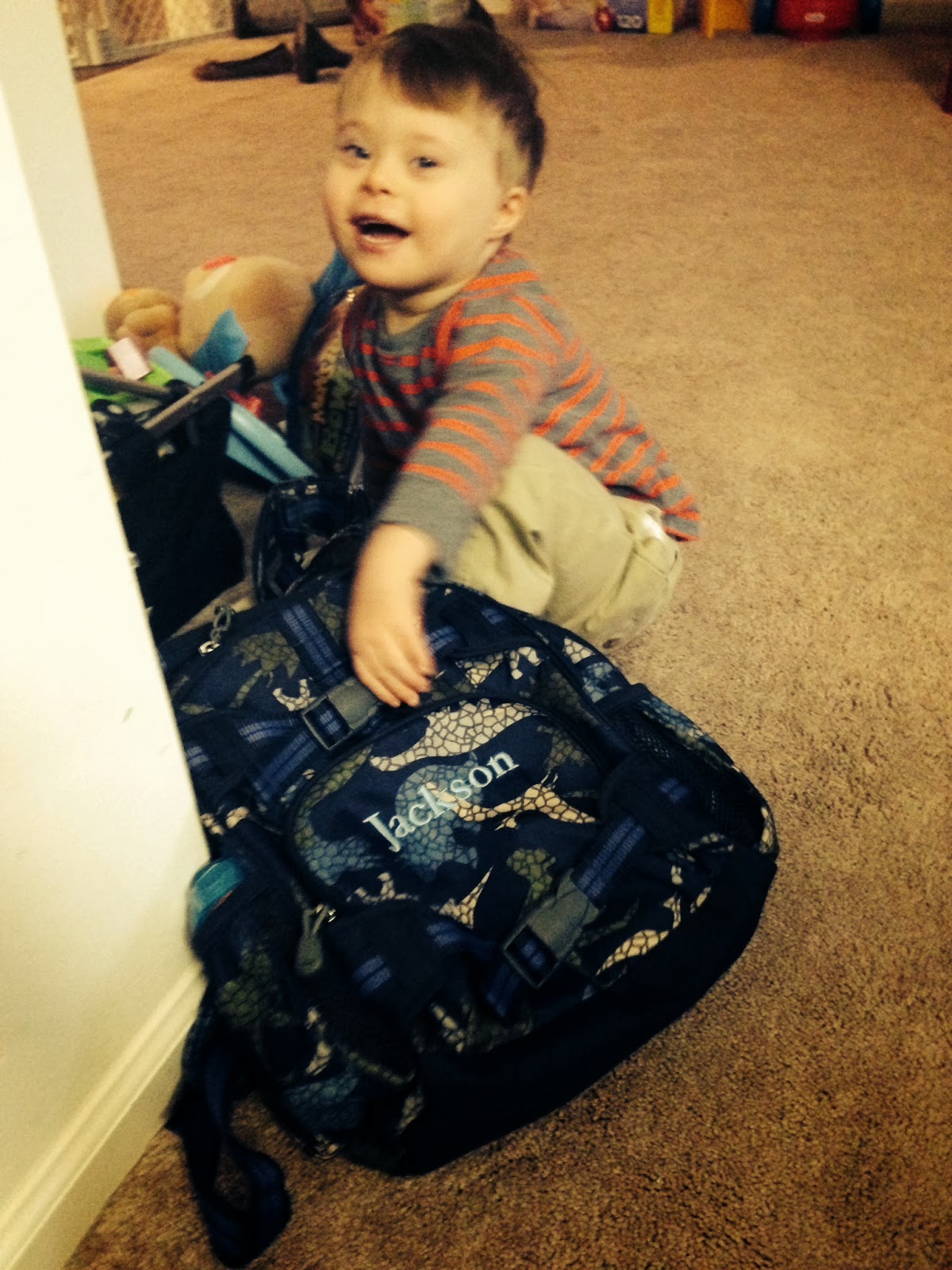 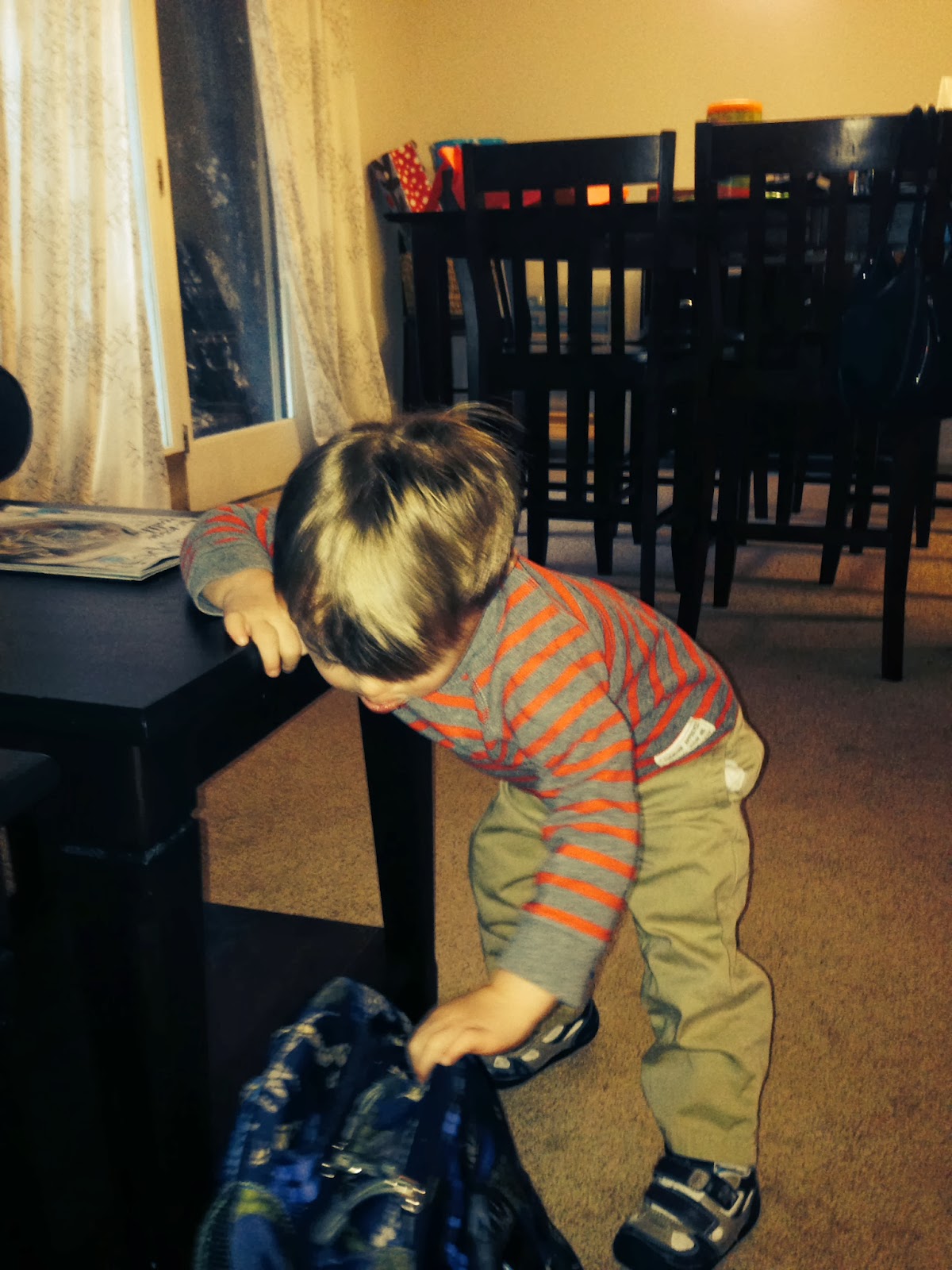 There was no bus for the first day (for some reason) so Adam dropped him off and he happily went off to play with the toys in his classroom.  I picked up a smiling, happy boy during my planning period, hustled him back to day care and then back to work.  He did great.  On the 6th, he had his first bus ride which was an adjustment...but its getting better.  He did cry on and off, but was fine once he got to school.  The bus ride home does not seem as bad and he is getting used to it.  Its hard to say if the bus scares him or whether he just doesn't want to be strapped in his car seat (he'll do that for us sometimes too).

In his backpack is a folder that we use for communication with his teacher and any school papers that need to be sent home.  He has adjusted wonderfully and really seems to enjoy being there.  He's getting more comfortable with his teachers and is more willing to allow them to walk him around hand in hand.

He came home the other day with colors on his hands, red and green.  It warmed my heart thinking of him participating (well hopefully participating willingly) in some sort of arts and crafts activity.  Sure enough, the next day he came home with an art project in his backpack.  They must have been using some sort of "stamp" with paint to stamp circles on paper.  Our first art project! 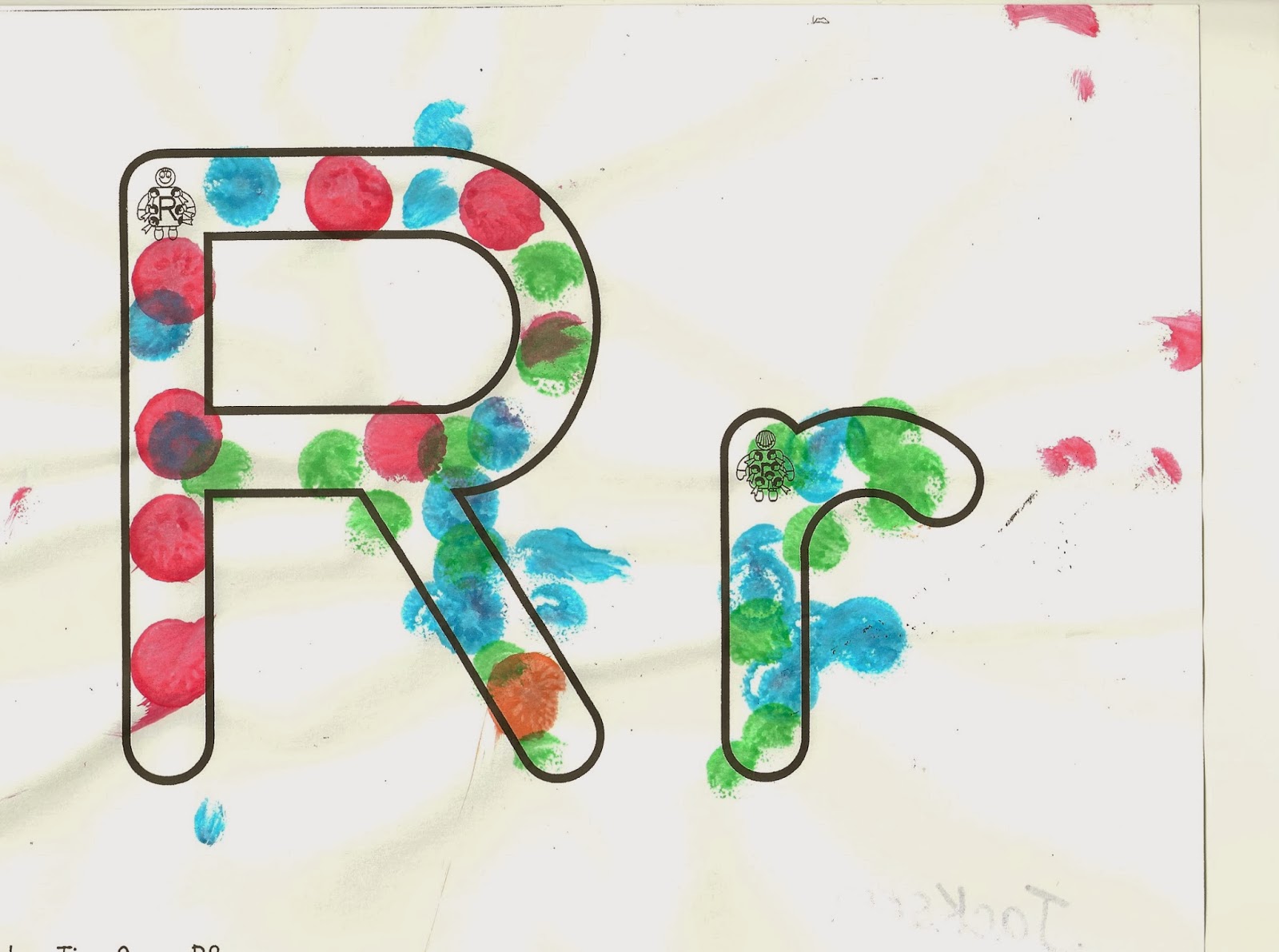 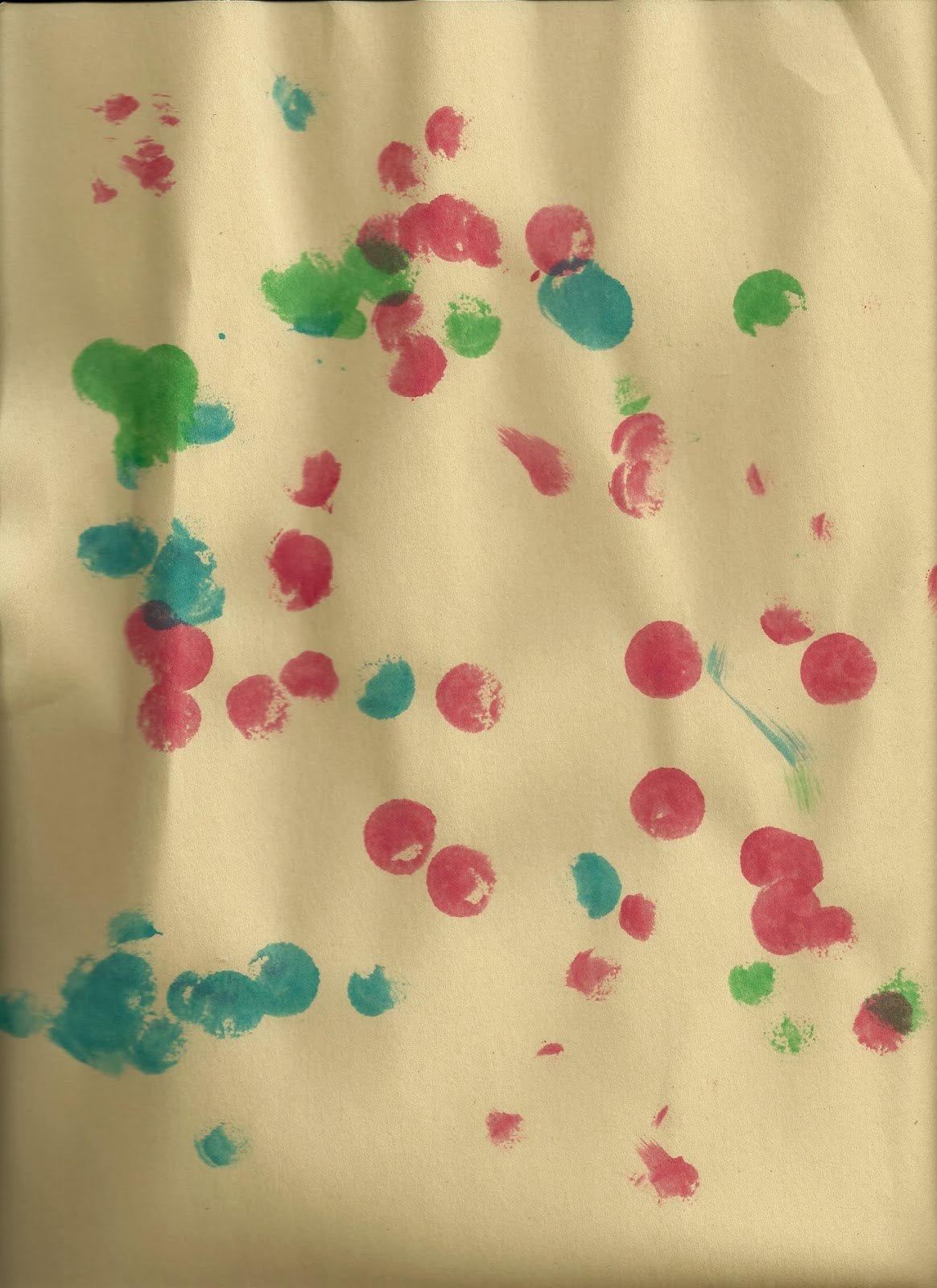 Right before the holidays we went to see an ENT specialist at Johns Hopkins.  We had gotten his hearing screened twice to get him ready for school and his left ear did not register correctly both times. After the second round, the advised us to see an ENT.  The day we went he also had a major cold.  Probably the worst he's been...so they didn't even bother doing a hearing test on him since most likely he would do poorly.  He ended up having an ear infection and major sinus infection.  They put him on some heavy duty antibiotics and recommended having his adenoids removed.  They also felt that tubes were a good idea since even though he has not had a ton of ear infections he most likely has fluid build up regularly which could affect his hearing.  Obviously if hearing is affected, then speech is affected.  Since we were there, I wanted them to take a look at his tonsils because they have always been visibly enlarged, sick or healthy. When the nurse looked in his throat, she was certainly amazed at how large they were.  They recommended a sleep study to determine whether his tonsils were obstructed his airways and if there was any signs of sleep apnea.  So last night we headed over to Howard County General at 7:30 pm to get the sleep study done...

We were sent home around 9:15pm.  Jackson has major sensory issues when it comes to his head.  We sat down in a chair with him facing out while they placed the wires on him.  He did fine with the ones that were placed on his body, but once the technician started placing them on his head it went down hill rapidly.  I did not realize how many they would be putting on his head.  There were about 5 on his forehead/temple area one on his lower cheek and then about 3-4 on the back of his head.  With one swipe of his hand (and with one final wire to be placed) he ripped them all off.  The more I tried to hold Jackson's arms, the more upset he got.  We tried one more time, but he just wasn't willing to cooperate.  We discussed letting him fall asleep and then placing the wires but that led us to the next issue.  Jackson has another sinus infection (he was healthy for about 10 days between infections).  The technician was concerned from the start about whether we would be able to get any reliable data because he's so congested.  They have to place a nasal cannula to assess his gas exchange and due to his sinus infection, it could get clogged with mucous (its really thick...gross) plus it may give a false positive for apnea since he can't breathe right anyways.


She was willing to give things a shot, but left it up to me about what to do.  I decided it wasn't worth his discomfort especially if we probably weren't going to get accurate results.  Part of me feels like I should have given it a shot and that maybe I gave up too quickly...but the other part of me feels like it would have been a waste of our time.  I plan on contacting his ENT on Monday to discuss what they want to do next.  I know his pediatrician recommends holding off on removing the tonsils (he did not think we would be successful with the sleep study...so he predicted correctly).  He did agree that the adenoids should go and that tubes are probably a good idea too.  I'm not sure if the ENT will want to try again when he's healthy or whether we'll just go ahead with the surgery (with or without the tonsils).  So we'll see... 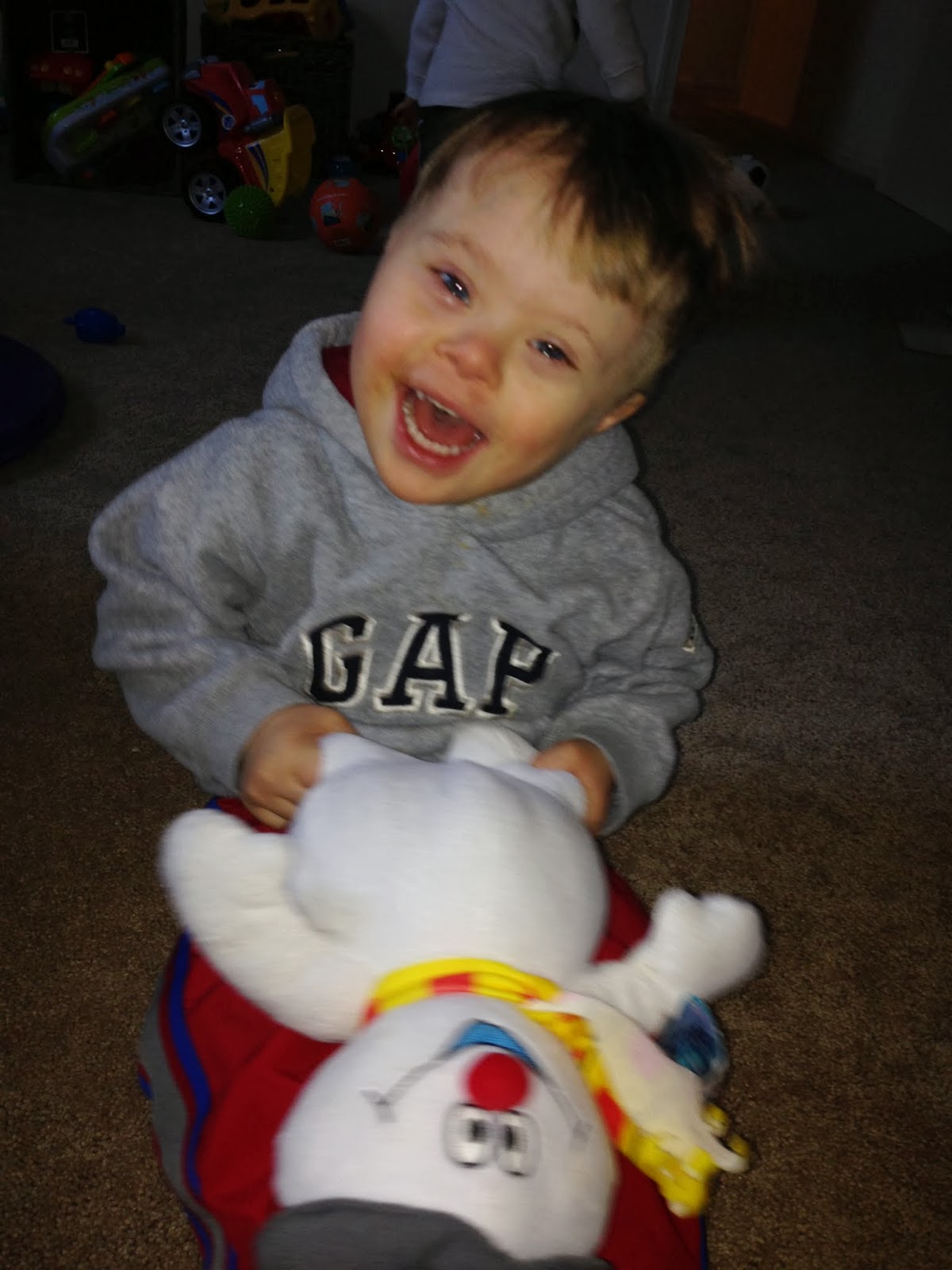 On a more positive note, Jackson is making great progress with his walking...he's so much more interested in walking to transition from room to room, etc.  I've witnessed him go from the floor to standing without something to pull up on twice which was very exciting.  His balance is getting better and better and he periodically will take some steps independently.  He's getting so close and both of his PTs are very optimistic with the progress he's making and him being able to walk soon (a relative term...but you know what I mean).  His private PT, whom we also used through Infants & Toddlers, is convinced he's going to start walking at school and she's not going to get to see it.  She's been working with him for the last 2 1/2 years (roughly) so I know she wants to see this accomplishment.  She told me that I couldn't stop the private PT until he's walking.  I told her we would make sure of it! 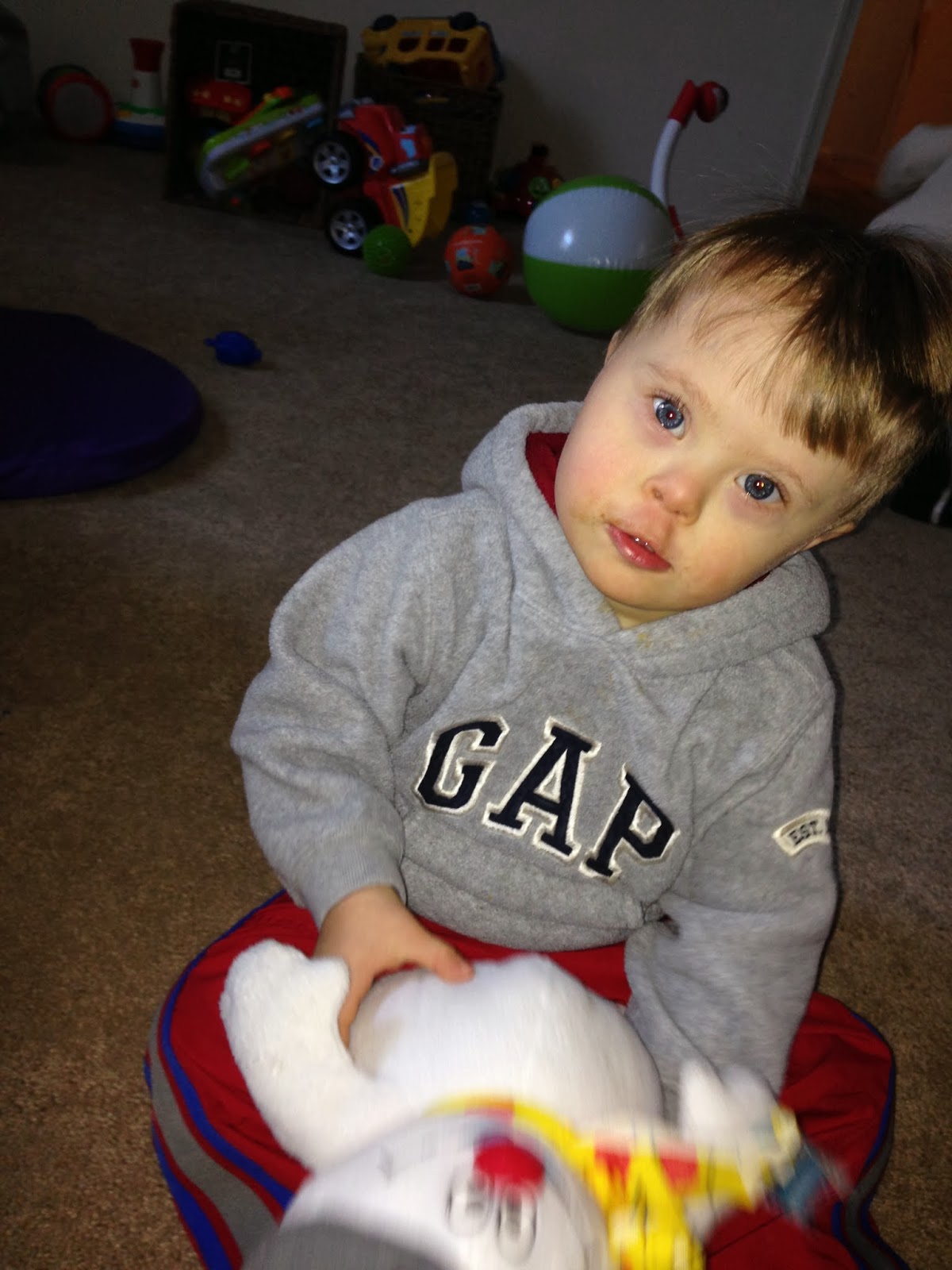 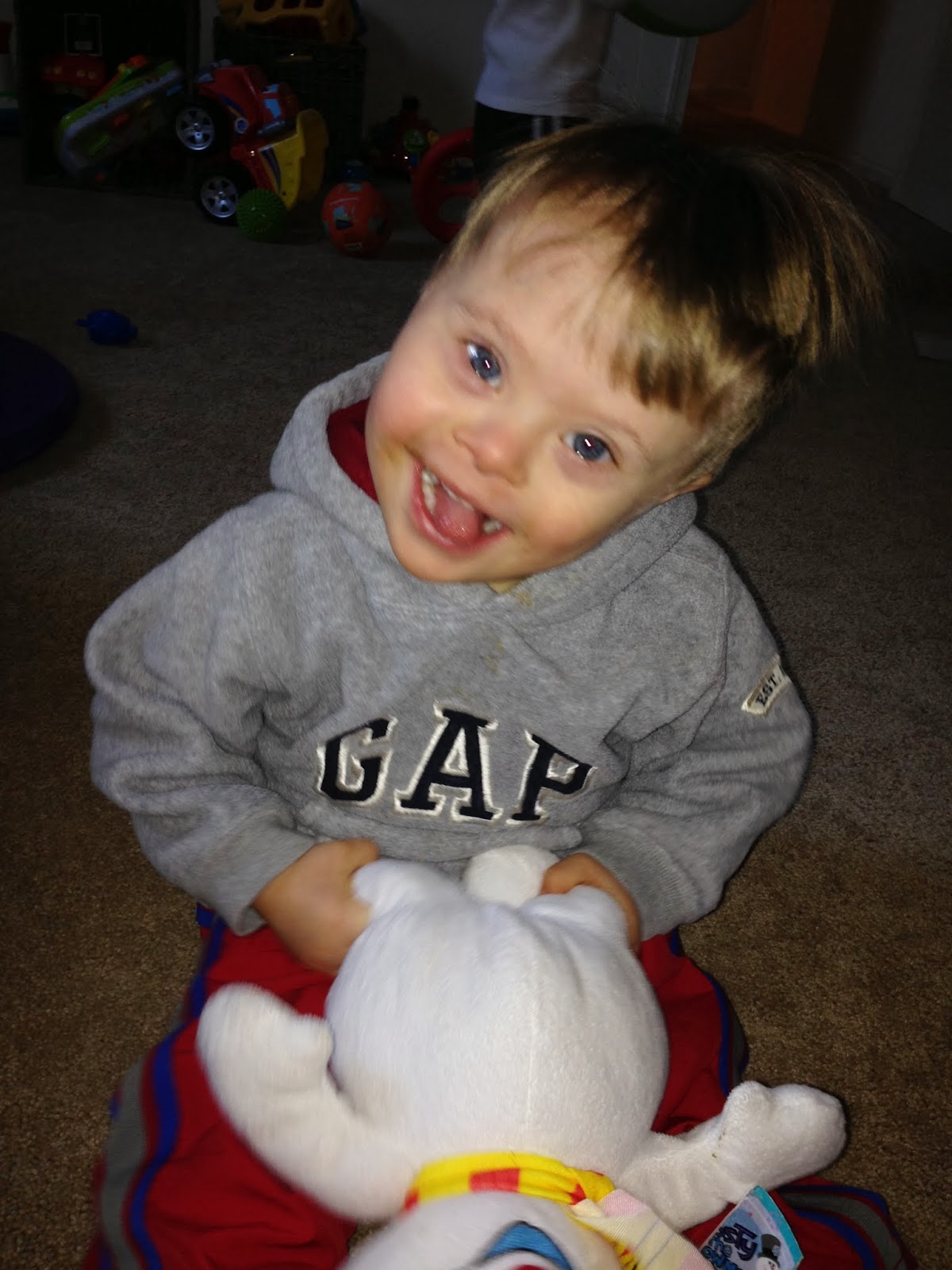 Well that's all for now...one of my New Year Resolutions is to post a blog post at least monthly...so this should cover me for January!  I'll certainly keep everyone posted about what happens with his surgery!  Happy weekend!