In his own time 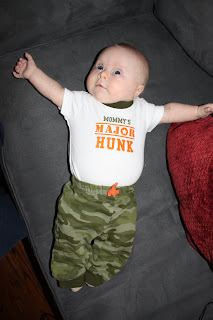 Knowing how important it is to get started on early intervention for Jackson, I was so glad that we were finally able to have our appointment with Infants and Toddlers after a cancellation due to the weather.  I was surprised to wake up and find myself a little anxious about the appointment.  I think most of my tension was due to not knowing exactly what was going to happen at the appointment, but in all honesty, it was a strange experience and not one that I enjoyed.

We arrived at our appointment a few minutes early and met with our case manager.  She went over the program with us and had us sign papers (lots of papers...she joked that we were buying a home).  Then the blitzkrieg began... as our case manager tried to hurry us along to the next room, I tried to quickly change Jackson and discovered he needed new clothing as well as a new diaper.  Once his emergency clothes were on, we went to the next room where a team of people sat just waiting to evaluate our little one (a speech therapist, physical therapist and developmental pediatrician, and a few others...don't remember their roles).  Jackson was placed on the floor and the firing squad began.  A one, a two, a two, a one... in between numbers, questions being asked of us and I couldn't stop that creeping feeling of being judged.  What answer are they looking for?  Where is this question leading?  As they scored our son, I just wanted to tell them, "He's perfect...leave him alone!"  They scored him when placed on his tummy after what felt like two seconds and I wanted to yell at them "he can do it, just give him a chance to!"  "How can you judge him based on only knowing him for a few minutes???"

But if I'm going to be completely honest here, they were all very nice, they were there to help him and get him services that he may need.  Being an over-achiever, I've never liked being scored because I've always put a lot of pressure on myself to do well.  I have to remind myself that this is not reflective of our parenting or them viewing him negatively.  They are doing their job so that Jackson can be successful later on in life.

So here are his scores (number is the month that he's presenting):

So the outcome of this evaluation?  Due to Jackson's condition, he is automatically eligible for the program.  He will be getting a physical therapist within the next month beginning with 8 sessions and a reevaluation in three months.

Jackson will get there in his own time...and on a lighter note, check out his emergency outfit that day... 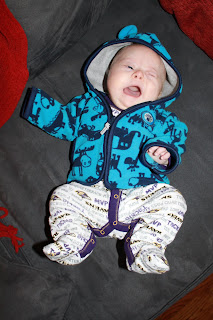 Medical update:  Blood work came back for his thyroid.  All is good!  TSH levels are down and thyroid hormone is up!  We will test again around four months!

That's all for now...gotta go work on some tummy time! 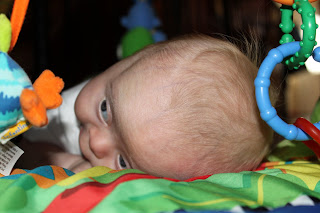 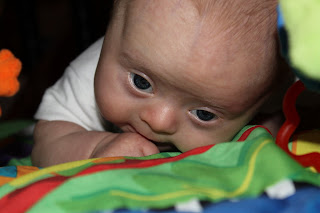 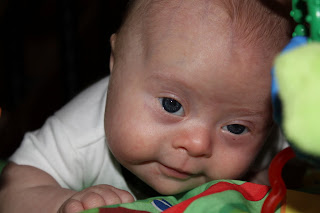 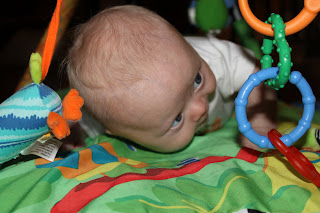