In my effort to keep this Blog Challenge organized, I decided to do "Therapy in Review" for our Thursday posts.  While today I'm going to summarize what our week looked like in therapy...I'll try to hit the highlights on future posts as not to bore you to death since a lot of the days will be similar.

Monday, PT was canceled since Chris wasn't feeling well.  We worked on our own stuff that you can see in Monday's post.


Tuesday, we had speech.  Keri came by and continues to work with him on making and imitating sounds.  He's gotten pretty good at imitating actions, however, does not do well with imitating sounds.  In fact, I commented to Keri about how he's so quiet during speech but swore to her that he does "talk" on and off throughout the day.  Keri even expressed her hopes and excitement that one day soon he's going to look at her and imitate the sounds she makes.

So in that effort, we worked on a puzzle that made noises of the different farm animals.  Jackson did a great job sliding the dog puzzle piece into the slot and pretty much just wanted to put that piece in and out of the puzzle.

Keri brought a "Toy Box" toy that contained small stuffed toys, such as a soccer ball, car, and doll to work on some imitating of actions.

And last, she brought out the favorite and always coveted bubbles.  During this playtime, we work on sounds such as "muh" in the word "more", "buh" in the word "bubbles", and "puh" in the word "pop".  He knows and understands the word more and will clap whenever he wants something (which is not the real sign for more, but its close enough and it's understood).

Wednesday was OT and Laura brought a big block that had activities on each of the sides.  For example, a zipper side, velcro side, button side, etc.  Jackson's favorite was the button side that had a ball inside the flap that you could tug.  The ball was on a string and once released the ball would vibrate back to its original position.  Once he discovered this side, Jackson wanted no part of the rest of the block.

Then we played with this octopus toy.  We worked on Jackson lifting up the shoes of the octopus in order to locate the ball and then place the ball inside the octopus.  Jackson really enjoyed this toy (which I may look into purchasing for him...perhaps, a birthday present for him???).    It requires two hands to 1) lift the shoe and then 2) pick up the ball.  By the end of the session Jackson was able to lift the shoe, but definitely needed assistance on holding the shoe open so he could pick up the ball.  Using both hands during a task is one of the things that we are working on.

We continued our work on stacking...which easily frustrates Jackson.  We have some blocks here at home which are easier for him to stack, but Jackson still finds this to be more of a frustrating activity.

After stacking we used a shape sorter to place shapes such as a circle, star, triangle, and square into the openings.  Jackson was able to do all but the triangle fairly easily.  This activity helps him with problem solving skills in addition to his fine motor skills.

Lastly, we once again attempted to have Jackson scribble.  Laura pulled out a mirror and a Crayola Window marker and scribbled on the mirror.  Jackson had minimal interest in using the marker but did have some fun looking at himself in the mirror.

Today, we had special instruction.  We had our initial visit last week with Lashawn (spelling???) who explained what the sessions would look like and how it was organized.  Each month would have a different theme, for example September they worked on body parts and October would begin farm animals.  She would come in and begin each session with a greeting song that would include Jackson's name and then begin various activities in which to meet his goals.  So I was a bit confused when another special instructor called wanting to set up a time to come work with Jackson.  In classic Infants and Toddlers fashion, they booked two different instructors.  Because Jackson will be attending day care at the end of this month, they had to contract out of the city for the special instruction because the daycare is in Howard County and the city special instructors do not go outside the city for therapies.  But of course, this wasn't communicated to the original instructor so we accidentally were assigned two.

So today we met with the new instructor who will be visiting with us in the home and then will go to Jackson's daycare.  Unfortunately I was disappointed by our visit with her today and hoping that my negative first impressions are incorrect.  I already miss Lashawn and her enthusiasm and organization...there was none of that today and Jackson didn't respond to her very positively.

I'm excited to report progress again with sucking on a straw.  We purchased this straw cup but did not have any luck with it.  It requires him to open the straw by putting pressure  on the straw with his mouth and suck.  I decided this was too complicated for him when he tried but couldn't get any liquid up.  So we made a trip out to Babys R Us and bought us some new ones to try.  I bought a milk shake from Burger King and we tested out this straw cup. 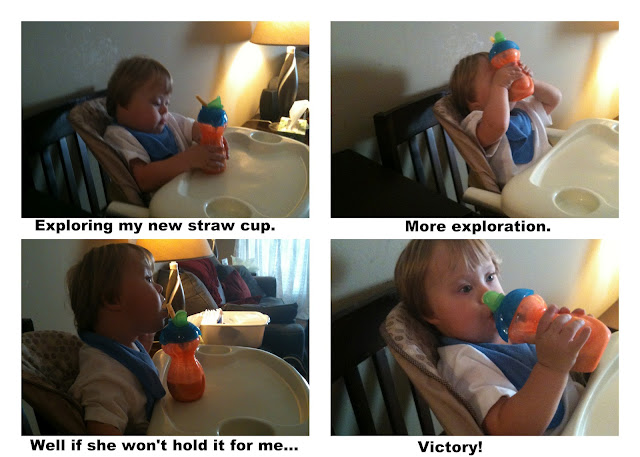 So excited that we are one step closer to being off the bottles!!!

Check back in tomorrow for day 5 of the 31 for 21 challenge!