First off, I should have prefaced yesterday what this 31 for 21 thing was all about.  October is Down Syndrome Awareness month and many in the DS community are bloggin' it up to advocate for their little ones in an effort to show that we are more alike than different.

I started this blog for two reasons: 1) To keep my family up to date on how their grandson was doing since my parents (and the bulk of my small family) are not local.  This has carried over to some close, dear friends who also do not live in the area and to Adam's brother Josh and his wife Lacey who are doing great works in China.

2) It felt good to let "it" out.  "It" being Down syndrome.  One of my initial biggest fears when Jackson was born was telling people that Jackson had DS.  In the hospital we knew it was a possibility due to the NT screening we had in the first trimester.  And once he arrived and the doctors gave us the litany of "issues" that Jackson had (all ending up very minor in the long run), I remember corresponding with our close friends and family and giving them regular updates throughout the week on Jackson's NICU stay and his DS confirmation.  Adam and I have been blessed to have close, dear friends (most of which we've known since high school, if not middle school and a few elementary schoolers in there!) and family that have welcomed and supported Jackson (and us) since he arrived.  But then there's the rest of the world, friends and acquaintances, and I didn't want to have to awkwardly explain every time to someone about Jackson having DS.  In those first couple of months, while we loved and adored Jackson, I still had moments where it hurt or I was scared and the idea of explaining anything other than how freaking adorable Jackson was, was not something I wanted to do.  I typed up the first two posts and published them...and didn't tell anyone about it for a few days...not even Adam.  I had to let it mull around in my head and then I shared it first with Adam who encouraged me to share it with others.  What better way to tell everyone than to share it with Facebook...I could post it once and never have to explain myself again.

I continue this blog for a couple of reasons: 1) Continue to update friends and family about Jackson and our amazing life with him and 2) The amazing responses I received after posting to Facebook...I felt less scared and felt that Jackson was welcomed into this world by a larger audience than I expected.  I have never deleted them and don't think I ever will.  This was a huge part of my healing process.

------------------------------
So on Day 2 of this 31 for 21 challenge marks "Two for Tuesday"...which in all my creative glory simply means that in keeping with the original purpose of this blog, Tuesday will be dedicated to discussing our life with two...because you know, we did have a second child about five weeks ago and he deserves at least the blip of recognition that only a second child can receive.

I was thinking about what I wanted to discuss and right away felt that the biggest thing I think about is what I want my boys to learn from us.  So here's a brief list: 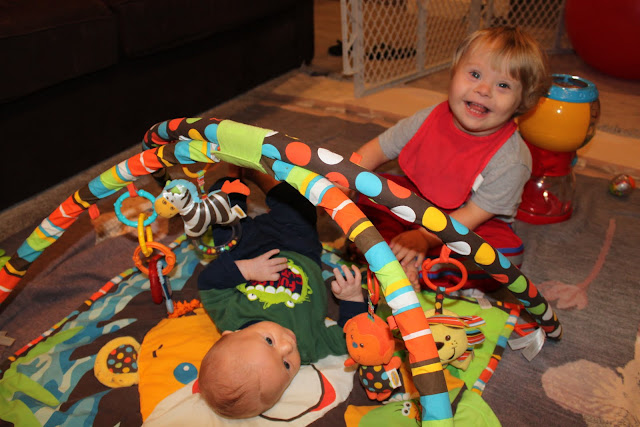 2) We are more alike than different.
Jackson may be slow to learn things, but he will learn them.  He may look different than other typically developing kids, but he is still beautiful.  There are many people out in this world, some typically-abled while others are differently-abled.  Some may talk, while others may sign or only grunt.  Some may walk, while others may require the use of a wheelchair.  Some may look different from us, but they are still beautiful.  We all deserve respect and if we want respect, then we have to first show respect.  Which leads me into...

Bullying scares me.  Kids like Jackson can be an easy target.  I know what easy targets look like.  I'm a school teacher and I see it ALL the time.  Obviously you do not have to have DS in order to be a target since most kids who are bullied do not have DS.  But Jackson's delays can make him an easy target and makes me scared just thinking about it.  After being given our high risk factor found in the NT screening, when I couldn't get out of bed, one of the images that kept replaying in my head was of a former student going up to one of my other students that had Asperger's and saying "You're a retard."  Now I will note, that the bully dropped out of high school and the student with Asperger's graduated this past spring...who's laughing now, bully!  But nevertheless, the thought of kids being cruel to each other is by far one of my biggest fears as a parent...not just for Jackson, but for Grayson as well.  I hope we can not only teach them not to be a bully, but to also stand up for those who may be the easy target.  Remember...we're more alike than different!

While we all have the right to use whatever language we want, there are still consequences to our choice of words.  The word "retard" and "retarded" is hurtful to families of individuals with special needs and therefore will be treated as such in our household.  There are many people who argue for their right to free speech or that it's simply slang or that they are being too sensitive.  But when it comes down to it, it does hurt people's feelings so why use a word that causes harm to others when there is a wide range within the English language to say what you mean? If your friend does something stupid, then say "That was stupid", not "You're such a retard".  If your computer is acting slow, then say, "Ugh, my computer is acting so slow" (ugh added for emphasis), not "My computer is retarded".  Its about showing some compassion for others.
5) Treat your significant other with respect.

I've been blessed to have married someone who treats me with respect.  He has never called me a derogatory term (even if he was thinking it) and continues to love and support me every day.  I'm grateful that he has a wonderful role model in his own father who certainly showed the way for his boys by showing how to be a good partner.  I know Adam will model this for our boys and instill in them how to treat their own significant others one day.

This is a tricky one as I see that children today have so much to deal with.  They not only have peer pressure and models from the Jersey Shore, but they also have the anonymity of the internet.  It is so easy to be a follower and fall into many traps that young people face today.  I hope that we can instill confidence in both of our boys that they not only can make decisions based on their own opinions and emotions but will also stand up for each other when needed.

I'm sure this list will grow and be modified as we gain experience as parents and as our children develop and approach new stages in their childhoods but I hope that through our efforts we will teach our children to be strong, independent and compassionate people. 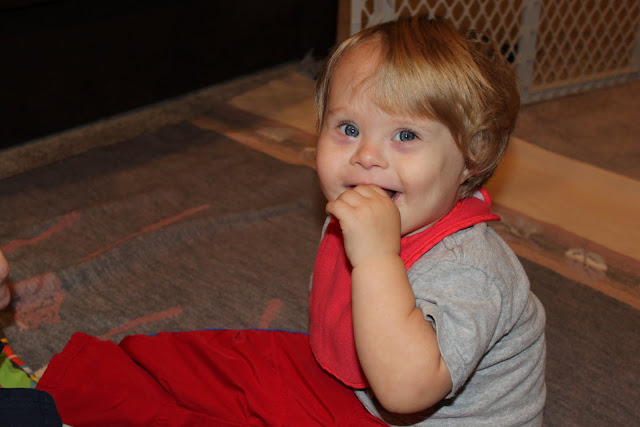 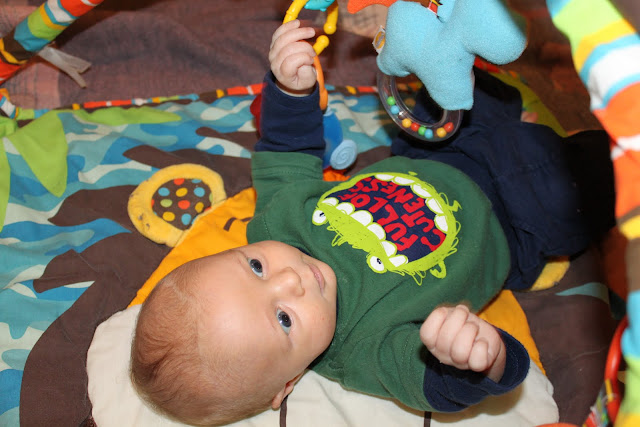